Azerbaijan to prepare сoat of arms for liberated Aghdam city 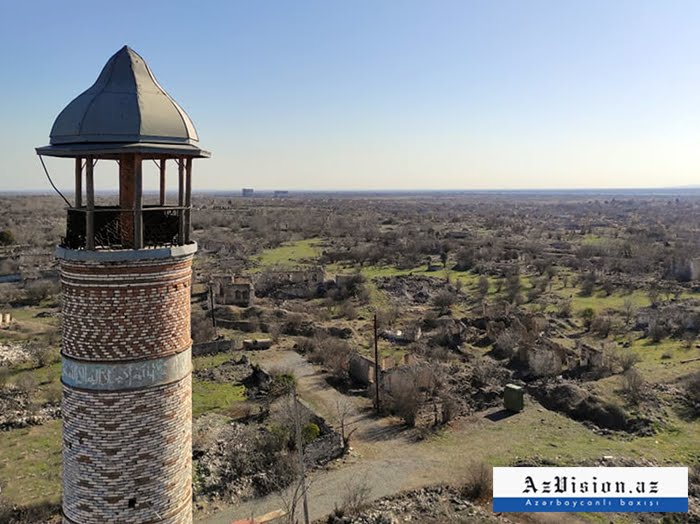 The special representative office of the President of Azerbaijan in Aghdam district [liberated from Armenian occupation in November 2020], including the city of Aghdam, has issued a statement on the preparation of the coat of arms of the city, AzVision.az reports on Aug.14.

"Dear citizens and Azerbaijanis of the world! Under the leadership of the President of Azerbaijan, the victorious Supreme Commander-in-Chief Ilham Aliyev, our brave army liberated the ancient Azerbaijani lands from almost 30-year occupation,” the statement said.

“Thanks to the targeted domestic and foreign policy, the wisdom of the President of Azerbaijan, Supreme Commander-in-Chief Ilham Aliyev, the unparalleled courage of the fearless heroes of the victorious Azerbaijani army, 28 years after the occupation, in accordance with the provisions of the trilateral statement of November 10 [between presidents of Azerbaijan, Russia and Armenia's prime minister], Armenia was forced to withdraw its occupation forces from Aghdam on November 20, 2020.

“Armenia had plundered our lands and turned them into ruins. The ancient and rich cultural and historical heritage, bio-ecological diversity and economy of Karabakh have suffered colossal damage, areas along the former contact line, especially in the liberated part of the Aghdam district, are contaminated with tens of thousands of anti-personnel and anti-tank mines, and unexploded munitions.

“As part of the measures taken to ensure restoration and reconstruction work in the liberated Aghdam district in accordance with the set goals, it’s very important to prepare the coat of arms of the city of Aghdam. Taking this into account, the special representation of the President of Azerbaijan in the liberated part of the Aghdam district, including the city of Aghdam, calls on the citizens of the country and Azerbaijanis around the world to support this work,” reads the statement.

According to the statement, citizens of Azerbaijan and Azerbaijanis of the world can send the proposed projects of the coat of arms of Aghdam city to [email protected] September 15, 2021.

Requirements for the coat of arms are as following:

1. The coat of arms should indicate that Aghdam belongs to Karabakh, which is an integral part of Azerbaijan. It should reflect the distant past, recent (modern) historical events, cultural features of the city and region. The sketch must be drawn up in accordance with the requirements of heraldry.

2. Project proposals must be sent to [email protected] no later than September 15, 2021.

3. The sketch must be sent in accordance with the following requirements:

a) It must be sent in the Microsoft Word file (.docx or .doc);

b) all elements of the coat of arms - general shape, symbols and signs, colors - must be described and explained in written form in the same Microsoft Word file (.docx or .doc);

4. The proposals should be sent with subject line ‘Sketch of the coat of arms of Aghdam’.