Azerbaijani President: Our expectations from Russia are that all the provisions of the trilateral Statement will be implemented 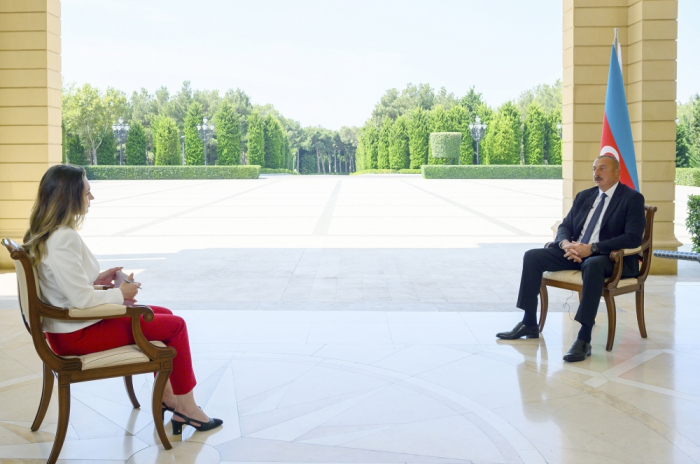 “Our expectations from Russia are that all the provisions of the trilateral Statement will be implemented. Because this trilateral Statement was signed by the leaders of Azerbaijan, Russia and Armenia, and most of them have already been implemented. But there are some issues that still remain outstanding. This is our expectation. Russia, as a neighbor of Azerbaijan and a close ally of Armenia, certainly plays a special role in this region. This is natural. We hope that Russia continues to spare no effort for the security of the region and take steps to ensure lasting peace. At the same time, our expectation is that Russia will not arm Armenia. We have brought this issue to the attention of Russian officials. We are worried about that,” said President Ilham Aliyev in his interview with CNN Turk TV channel.

“The war is over. The people of Armenia have come to terms with this situation. The Armenian government has also come to terms with its own defeat and the recent parliamentary elections in Armenia showed that. So the people have already given preference to a defeated party. This is an unprecedented sight in history when a defeated party receives popular support. Under such circumstances, of course, it does not make any sense to arm Armenia. We do not see it happening yet, but there have been some statements by Russia. A few days ago, during a meeting with the Armenian defense minister, the Russian defense minister said that the process of sending Russian weapons to Armenia had begun. This is a very worrying issue,” the head of state said.

Noting that Armenia’s new minister of defense made very irresponsible statements, President Ilham Aliyev said: “It seems that the second Karabakh war has not been a lesson for everyone yet. If this is the case, then we are ready to teach them another lesson. Therefore, we hope that Russia does not arm Armenia because there is no need for that.”