President Aliyev: We tried to protect the lives of every soldier until the last moment 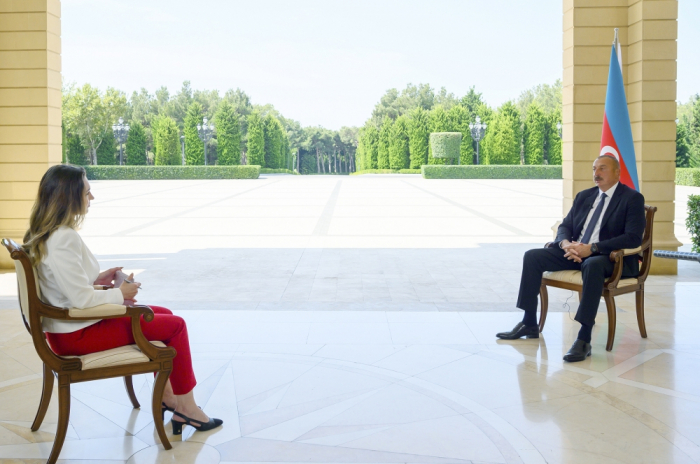 In his interview with CNN Turk TV channel, President of Azerbaijan Ilham Aliyev highlighted the reasons why the second Karabakh war ended in victory.

“Of course, many factors have played a role here. First of all, of course, the determination of our people, their uncompromising position and our policy. I have been president for almost 18 years, and for all these years I have been saying that we must and we will liberate our lands at any cost. We simply had to do it at the right time, and we did it. We couldn’t afford to make a mistake because this is historical responsibility, and therefore our timely steps have led to such an outcome. The uncompromising spirit of the people is, of course, one of the primary factors. Because we had not forgotten Karabakh. Even the kids who have never seen Karabakh and were born in tent camps lived with a dream and desire to return to their homeland. It was thousands of young people like that who were ready to die,” the head of state said.

“The strengthening of our army, the weapons, equipment and ammunition are also among the key factors. In recent years, weapons based on the most modern technology have been purchased and the professionalism of our army has further increased. Because weapons and technology solve many problems, of course. But it is soldiers who liberate the land and raise the flag there. If they do not go to war with enthusiasm, no weapon can help you. These factors led us to Victory. Our military strategy and the acquisition of weapons served one goal – to liberate these lands with minimal losses, and this is exactly what happened. No-one could believe that our losses were less than 3,000 people. Everyone's life is precious, but the fact that only 2,900 people were killed in this large-scale operation shows, of course, that we tried to protect the lives of every soldier until the last moment,” President Ilham Aliyev noted.