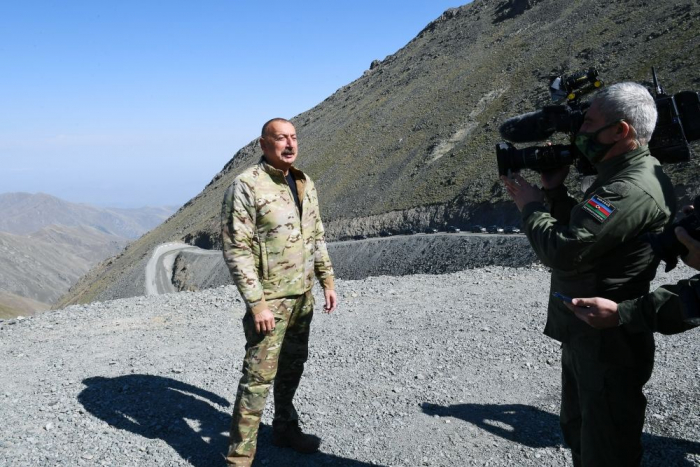 Zangilan Airport will probably be commissioned in 2022, said Azerbaijan’s President Ilham Aliyev, as he laid the foundation of Lachin International Airport.

“Today, the foundation of a large infrastructure facility is being laid on the liberated lands. The construction of an international airport starts in Lachin district. I announced the construction of this airport some time ago. I said that three international airports would be built on liberated lands. This work has already started in Fuzuli and Zangilan. Fuzuli International Airport will be ready for operation by the end of this year or early next year," the head of state said.

"Work has also started in Zangilan, and I personally laid the foundation of Zangilan International Airport. Zangilan Airport will probably be commissioned in 2022. In Kalbajar and Lachin districts, as I announced after the war, land will be sought and international airports will be built. The search for a place, of course, took a long time. Because the terrain in Kalbajar and Lachin districts is such that it is impossible to find a plain here. Although both districts cover a very large area – mountains, forests, valleys, hills – there is almost no flat road, no flat land. A place was chosen where it is possible to build an airport by carrying out large-scale earthworks. The airport runway will be behind me. It is hard to imagine that now. I think that for the first time in the history of the world, an airport is being built in such terrain conditions. Because all airports are usually built on plains. Since there is no such place here, the only place was chosen here, in Ovchu village of Lachin district. At the same time, the advantage of this place is that the distance to Lachin is a little more than 30 kilometers, and the distance to Kalbajar is a little more than 60 kilometers. At the same time, the distance to Shusha is about 70 kilometers. So in the future it will be possible to use both Fuzuli and Lachin airports to fly to Shusha. As I said, a lot of earthworks will be done here. Some gaps will be filled. Earthworks will be something that takes a lot of time,” President Aliyev added.