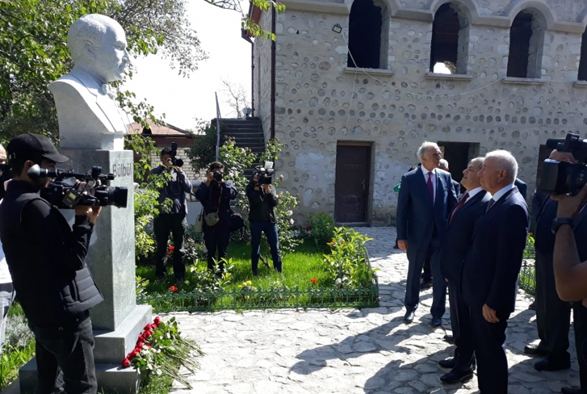 Well-known cultural figures of Azerbaijan have arrived in the city of Shusha (liberated from Armenian occupation), AzVision.az reports.

As part of the trip, they will take part in the 18th International Music Festival named after Uzeyir Hajibeyli, the Azerbaijani outstanding composer.

Within the trip, the everlasting compositions of Uzeyir Hajibeyli will be voiced in his homeland, in the city of Shusha.

The 18th International Music Festival of Uzeyir Hajibeyli is the second festival held in Shusha after the liberation of the city from Armenian occupation. The cultural capital of Azerbaijan hosted the Kharybulbul music festival on May 12.

On September 18, Azerbaijan celebrates National Music Day. This holiday went down in history as the birthday of the outstanding composer, musicologist, teacher, publicist, playwright, founder of the Azerbaijani professional musical art, People's Artist of the USSR Uzeyir Hajibeyli (1885-1948).

On this day, the inauguration of the Uzeyir Hajibeyli International Music Festival will also take place. Musicians from Poland and the US will also perform at the festival, which will be held between September 18-24 with the participation of creative groups and soloists from Azerbaijan.