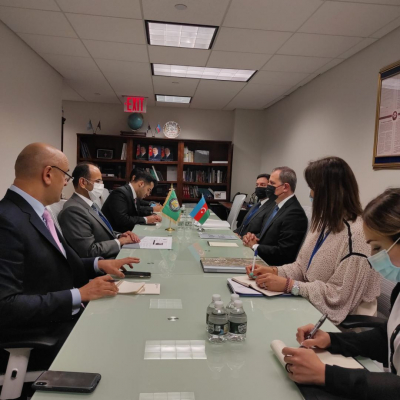 Within the framework of the 76th session of the UN General Assembly, Azerbaijani Foreign Minister Jeyhun Bayramov met with the Secretary-General of the Cooperation Council for the Arab States of the Gulf (GCC), Naif Falah Mubarak Al-Hajraf, AzVision.az reports citing Foreign Ministry of Azerbaijan.

It was noted at the meeting that political relations between Azerbaijan and the member states of the GCC are at a high level, based on mutual respect and friendship.

Confidence was expressed that the Azerbaijan-Persian Gulf business forum, which will be held in Baku, will create favorable conditions for the further development of this cooperation in the spheres of economy, trade, investment, and tourism.

Minister Jeyhun Bayramov informed the opposite side in detail about the post-conflict situation in the region, in particular about the mine threat and its consequences, restoration work in the liberated territories of Azerbaijan. The interest of the member countries of the GCC to participate in joint construction projects on the lands liberated from the occupation of Azerbaijan was highly appreciated.

The Secretary-General noted that the position of Azerbaijan on the ended conflict has always been unambiguously and fully supported by the GCC.

The parties discussed the possibilities for expanding cooperation between Azerbaijan and the GCC, including the development of a Joint Action Plan for 2021-2025, as well as issues of regional and international security.