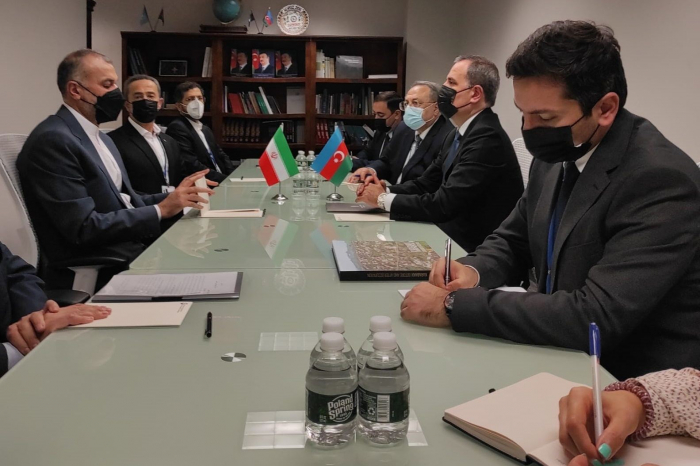 Azerbaijani Foreign Ministry’s Chief Jeyhun Bayramov met with his Iranian counterpart Hussein Amir Abdullahiyan as part of his participation in the 76th session of the UN General Assembly, AzVision.az reports citing the ministry.

During the meeting, the parties stressed that cooperation between Azerbaijan and Iran is developing in all spheres.

Besides, the ministers exchanged views on a number of issues on the agenda of bilateral relations, prospects for cooperation in the economic, energy, trade, agriculture, and other spheres, and discussed the current situation in the region.

The Azerbaijani official informed his Iranian counterpart about the processes of restoration, reconstruction, and reintegration launched after the signing of the trilateral statement [between Azerbaijani, Russian and Armenian leaders on November 10, 2020, to end the Second Karabakh War] in the territories liberated from Armenian occupation [as a result of the war].

Abdullahiyan stressed that the Iranian side is interested in the development of comprehensive relations with Azerbaijan.

Issues of mutual interest were also discussed at the meeting.