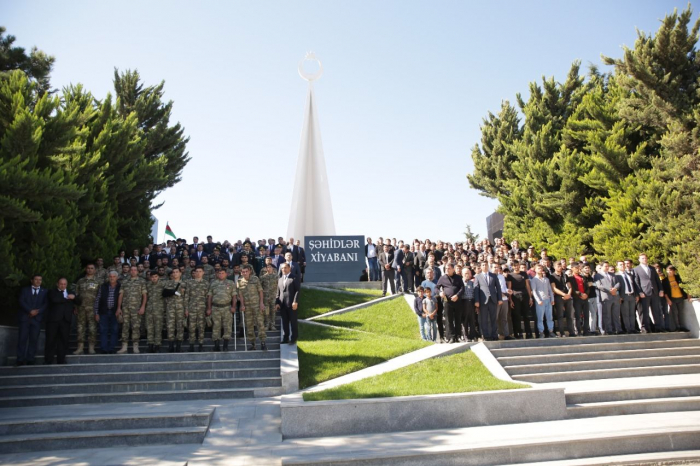 On the occasion of Remembrance Day, the bright memory of the martyrs was honored in the Khachmaz district of Azerbaijan on September 27, AzVision.az reports.

Events in the Khachmaz district, to mark the Remembrance Day, began in the Victory Park under construction. The head of the Executive Power of the Khachmaz district, Elnur Rzayev, MP Sevil Mikailova, heads of local law enforcement agencies, members of the families of martyrs and veterans of the Karabakh war planted trees in the name of each martyr.

During a sincere conversation with the members of the martyrs' families, the head of the district spoke about the heroism of the soldiers and officers of the glorious Azerbaijani army under the leadership of the President of Azerbaijan, Supreme Commander-in-Chief Ilham Aliyev in the 44-day war.

The event continued on the Alley of Martyrs.

The head of the district laid a wreath at the "Eternal Flame", visited the bust of the National Hero of Azerbaijan Yaver Shahbazov.

During the meeting with the district administration, the members of the martyrs' families expressed gratitude to President Ilham Aliyev and First Vice President Mehriban Aliyeva for the attention and care shown to the families of the martyrs and veterans.

At 12:00, the memory of the martyrs was honored with a minute of silence.

As a sign of deep respect for the soldiers and officers who heroically fought during the 44-day Patriotic War and raised the Azerbaijani flag on the liberated lands, as well as to the memory of the martyrs who gave their lives for the territorial integrity of Azerbaijan, the Remembrance Day will be marked on September 27.