Azerbaijan, Turkey and Pakistan will continue to strengthen partnership in defense, says envoy 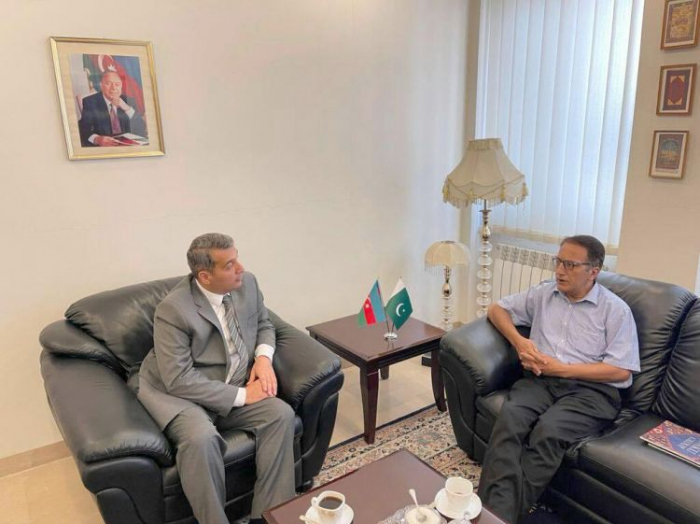 Azerbaijan, Pakistan and Turkey will continue to strengthen partnership in many spheres, including defense and security sectors, said Azerbaijani Ambassador to Islamabad Khazar Farhadov.

During a meeting with Tazeen Akhtar, Editor of "Pakistan in the World", the Azerbaijani diplomat highlighted the importance of the “Three Brothers - 2021” military exercises of Azerbaijan, Pakistan and Turkey.

As for the launch of direct flights between Azerbaijan and Pakistan, Farhadov said the flights will be started as soon as the pandemic situation comes under control.

“Pakistan is a very beautiful country. I would love to explore more destinations. The people of Pakistan are welcoming and friendly. I am feeling at home in Pakistan,” the Azerbaijani diplomat said.

Editor Tazeen Akhtar, in turn, expressed his gladness on how Azerbaijan liberated Armenian occupied territories. He said a large number of people in Pakistan and around the world felt happy on this success of Azerbaijan because no one favors the occupation of tyrant nations on the lands of other people. He presented the example of the illegally occupied Jammu Kashmir.

The ambassador noted that Azerbaijan seeks good relations with all neighbors and other countries of our region.

“Azerbaijan is following a policy of walking with all for common well-being. But if someone does not want good neighborly relations, Azerbaijan reserves the right of self-defense and has the ability to thwart any aggression,” he added.

Farhadov said that Armenians are now learning that they are being used as a tool against Azerbaijan by the Armenian diaspora and their allied forces.

“Some countries argue that Armenia has very small territory. We say you have vast lands in your countries. If any country supports separatism, they can give their own land to Armenians,” he said.

The ambassador noted that the wars and proxies left Armenians with a rapidly reducing population.

“They are only two million in the country while Azerbaijan crossed 10 Million last year. The Armenian leadership needs to learn the lessons from history and from the recent developments and defeats. Armenian local people are now starting to understand what is happening with them. The Armenian diaspora is almost double in the number of locals. They are richer than the locals. They instigate them to fight and force them to go into war. The locals are now mindful of that "use as tool" game of their diaspora,” he said.

As for Baku-Islamabad ties, the diplomat expressed deep gratitude to Pakistan for support in Second Karabakh War last year. He said that we will never forget that Pakistan was standing with the Azerbaijani people in a difficult time.

Farhadov agreed with the editor that direct communication between the two countries is a per-requisit to further increase cooperation and relations. Ambassador shared that direct flights will start as soon as the pandemic situation is over. Visa will also be made easy for Pakistani visitors.

Editor Akhtar recalled his visit to Baku and Nakhchivan in Feb 2020 to cover parliamentary and presidential elections. He appreciated the steps taken to make the election process as transparent as possible. He also admired the state policies thanks to which the people of Azerbaijan looked satisfied and happy all over the country from the Capital city to the Autonomous Region of Nakhchivan. He said the media persons of Pakistan were astonished to see how high entrepreneurs approach the far most region's people have.