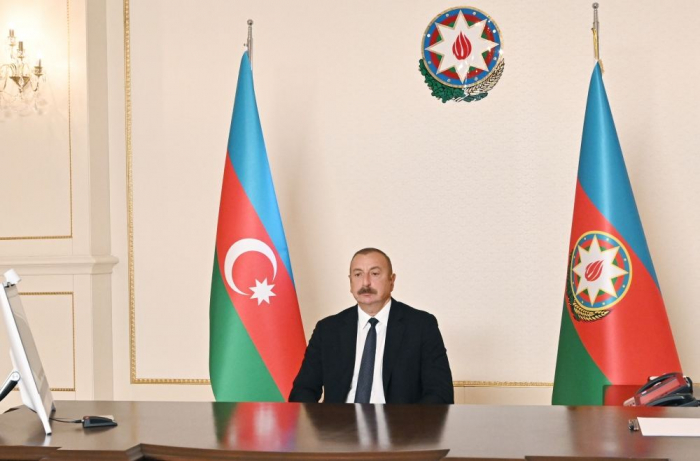 Those persons who have been detained or captured during the phase of the war and those persons whom we detained during the war, all of them have been returned immediately after the war ended, President of the Republic of Azerbaijan Ilham Aliyev said in an interview to Spanish EFE news agency, AzVision.az reports.

“With respect to the so-called prisoners of war, I want to clarify this issue for your audience. I have on many occasions referred to international law norms, international conventions, about who can be considered prisoners of war? And according to international conventions, those persons who have been detained or captured during the phase of the war and those persons whom we detained during the war all of them have been returned immediately after the war ended. We actually returned them earlier than Armenians returned our prisoners. Those people who are now in detention and already sentenced whom Armenia and some others claim as prisoners of war do not belong to this category because these people have been sent to liberated territories at the end of November. More than two weeks after the war ended, more than two weeks after Armenia signed a capitulation act and they have been detained on the territory which we liberated at the beginning of December. 62 persons and some of them committed crimes, they attacked our military servicemen and killed four of them. So, they are not prisoners of war. They are terrorists, they are members of a sabotage group who’ve been sent in order to attack Azerbaijani civilians and military servicemen. Despite that, we have returned some of them during this period, and that was a sign of goodwill,” the head of state said.

“But with respect to the maps of mines which have been planted by Armenia in the territories, which were under occupation, and the 100 thousands of mines, in the beginning, when we were demanding to give us these maps Armenian government on the very high-level were saying that they do not have it. And during the time since the war ended, during this almost one year, we had close to 150 casualties of civilians and military servicemen who either were killed or seriously injured due to the fact that Armenia do not give us the maps. Some maps have been given relatively recently but the accuracy of those maps is only 25 percent. So what we are demanding is that Armenia gives us accurate maps, the map which can be easily identified not the area where they are planted, they are planted everywhere, but a particular place. They have this particular information which they refuse to give us. If they do it, if they show the goodwill, of course, we will respond adequately,” President Aliyev said.