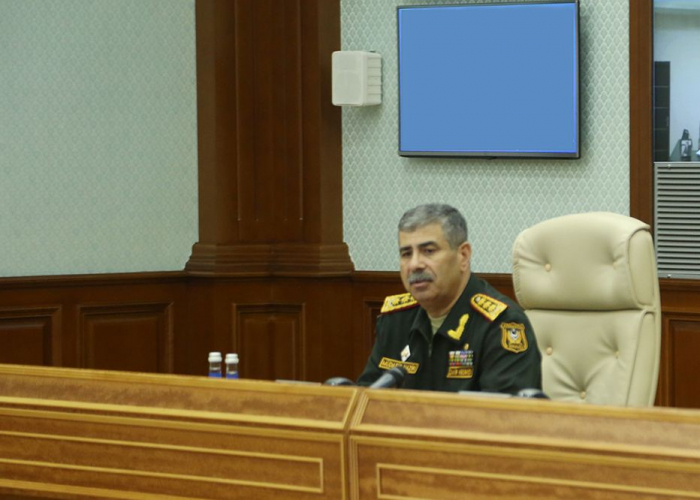 A service meeting was held at the Central Command Post under the leadership of Azerbaijani Defense Minister Colonel-General Zakir Hasanov on October 2, AzVision.az reports citing the press service of Azerbaijan’s defense ministry.

It is reported that the meeting discussed the situation on the state border and in the territories of Azerbaijan, where the Russian peacekeeping contingent is temporarily deployed.

In order to maintain the combat readiness and vigilance of personnel at a high level, the Minister of Defense gave relevant instructions related to the practical development of the actions of subunits and command posts, clarifying combat plans and with an emphasis on logistics.

During the meeting, the importance of familiarizing personnel with safety rules and strict control over their observance was especially emphasized.

The Minister gave appropriate instructions on organizing the service of troops in units deployed in the liberated territories, clearing the territories of mines and unexploded ordnance, creating military infrastructure, laying mountain roads and maintaining them in good condition, completing the preparation of units for winter, timely delivery of the necessary resources to features of units serving in mountainous areas.

Also, Hasanov gave instructions on the placement of recruits, the distribution of which is carried out electronically, as well as on the organized performance of work on the transfer to the reserve of military personnel of urgent active military service in accordance with the order of the Supreme Commander-in-Chief.