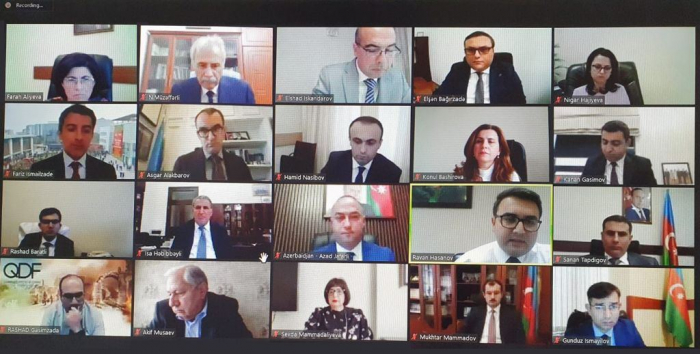 The working group on the scientific, educational and cultural issues of the Interdepartmental Center under the Coordination Headquarters, created with the aim of centralized solution of issues in Azerbaijan's territories liberated from the Armenian occupation [in the 2020 second Karabakh war], held a meeting, AzVision.az reports on Oct.2.

During the meeting, attended by representatives of Azerbaijan’s Presidential Administration, the ministries of culture and education, the State Committee for Work with Religious Structures, the Baku International Center for Multiculturalism, the Intellectual Property Agency, the State Agency for Tourism, the Karabakh Revival Fund and the National Academy of Sciences, discussions were held on the protection, restoration and promotion of cultural heritage in the liberated lands.

Besides, the participants discussed the results of recent archaeological researches, scientific meetings and prospects for the future, preliminary results of unfinished works, the design of the museums of occupation and victory, as well as opportunities in the field of tourism.

The relevant government agencies were given instructions for the upcoming tasks.

The Coordination Headquarters, created upon the order of the President of the Republic of Azerbaijan Ilham Aliyev dated November 24, 2020, is led by Head of the Presidential Administration Samir Nuriyev.