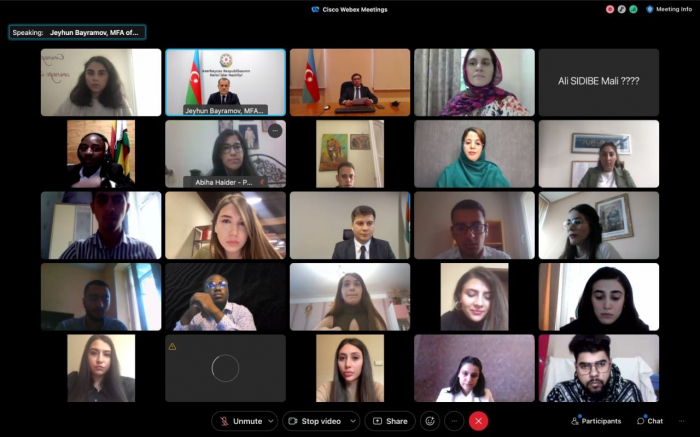 The Inaugural Meeting of the Youth Network of the Non-Aligned Movement (NAM) being held online started on Oct.4, AzVision.az reports citing the Azerbaijani Foreign Ministry.

According to the ministry, more than 100 representatives of youth organizations of the countries participating in the NAM are taking part in the meeting.

Azerbaijani Foreign Minister Jeyhun Bayramov made a speech at the opening session.

The minister pointed out that in this significant year when the NAM celebrates its 60th anniversary, the establishment of the Youth Network on the initiative of the chairman of the organization of Azerbaijan is a historic event.

Bayramov states that the countries participating in the organization expect a lot from the work of the network.

Bayramov reminded that the decision to establish the Youth Network was made by the heads of state and government of the countries participating in the Non-Aligned Movement at the summit in Baku.

The activities of the Youth Network will contribute to the exemplary solidarity of the countries of the Non-Aligned Movement in the fight against the COVID-19 pandemic on the basis of the initiatives put forward by the President of Azerbaijan Ilham Aliyev.

In conclusion, Bayramov noted that a high-level jubilee event dedicated to the 60th anniversary of the NAM will be held in Belgrade on October 11-12, 2021, and invited the members of the Youth Network to prepare their recommendations on the future of the Movement in order to present them to high-level officials of the movement’s member countries.

At the inaugural meeting of the Youth Network, the parties will exchange views on further management and make appropriate decisions.

The inaugural meeting will end on October 5.