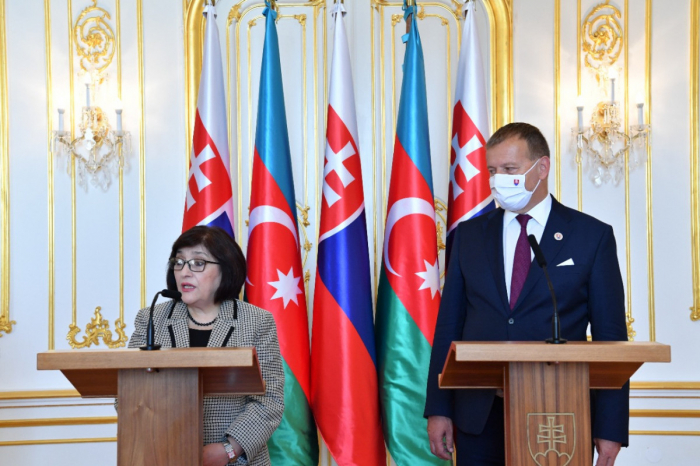 Within the official visit of Speaker of Azerbaijan’s Parliament Sahiba Gafarova to Slovakia, a joint briefing was held after the meeting of the speakers of the parliaments of the two countries, the Azerbaijani Parliament told AzVision.az.

During the briefing, Gafarova stated that the visit of the Azerbaijani parliamentary delegation to Slovakia continues successfully.

“This is the first official visit to Slovakia at the level of the Speaker of the Parliament. We had constructive meetings with Prime Minister of Slovakia Eduard Heger and Chairman of the National Council Boris Kollár. At the meetings, Azerbaijani-Slovak relations were discussed at the parliamentary level, we shared our views on further deepening relations in bilateral and multilateral formats," said Gafarova.

The speaker noted that Azerbaijan is interested in developing relations with Slovakia, one of the EU countries, adding that mutual visits and exchange of experience in the field of legislation were discussed during the meeting with the Speaker of the Parliament of Slovakia Boris Kollár.

Gafarova also stressed that the development of inter-parliamentary relations can play an important role in bringing peoples closer together, in objectively communicating the realities of Azerbaijan to the Slovak public.

She expressed confidence that the deepening of inter-parliamentary relations will contribute to the development of relations between the two countries.

The Azerbaijani Parliament chairperson noted that during the meetings she informed her counterpart about the new situation in the region after the 44-day Armenia-Azerbaijan second Karabakh war, brought to their attention that Azerbaijan had restored the territorial integrity recognized by the international community.

Prior to the 30th anniversary of the Khojaly genocide committed by Armenia against Azerbaijan, the speaker expressed hope that the Slovak parliamentarians will also begin the process of recognizing this genocide.