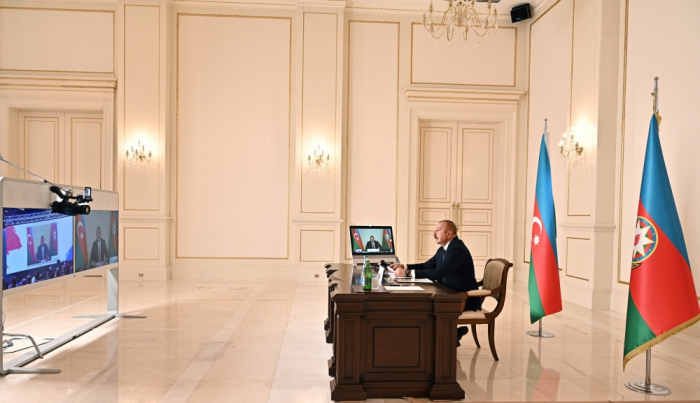 A High-Level Commemorative Meeting to mark the 60th Anniversary of the Non-Aligned Movement has today kicked off in Belgrade, the capital city of Serbia.

President of the Republic of Azerbaijan, Chairman of the Non-Aligned Movement Ilham Aliyev chaired the official opening part of the event.

The head of state made a speech in a video format at the event.

First of all, I express my gratitude to Mr. Aleksandar Vucic, President of Serbia for hosting this High-Level Commemorative Meeting on the occasion of the 60th anniversary of the Non-Aligned Movement. This initiative demonstrates Serbia’s respect for its historical heritage and the NAM’s principles.

Since its establishment in 1961 in Belgrade, the NAM has played an important role in the international arena with its dedicated efforts for the sake of global peace, justice and solidarity in the world.

Being the largest international institution after the UN General Assembly, the NAM is considered a genuine example of multilateralism with its cross-regional membership, uniting 120 countries from diverse historical, political, and cultural backgrounds.

The historical Bandung principles, such as the respect for the sovereignty and territorial integrity, refraining from acts of aggression, and the non-interference in the internal affairs lie at the core of the NAM. Those principles remain valid and essential in the current international relations. If the Bandung Principles were upheld by all States, we would not observe the wars and conflicts.

In order to contribute more to strengthening peace, security, international law and justice Azerbaijan decided to join the NAM family in 2011.

In a short time, Azerbaijan gained great confidence and esteem among the Member States of the Movement, and with a unanimous decision of the NAM leaders of 2016, Azerbaijan was elected as the chair of the NAM for the period of 2019-2022.

At the 18th Summit of Non-Aligned Movement, held in Baku in 2019, I stressed that Azerbaijan would build its chairmanship priorities and activities on the basis of the Bandung principles and resolutely defend the justice and norms of international law. Azerbaijan conducts fully independent domestic and foreign policy, and effectively neutralizes all attempts of foreign interference into its internal affairs.

As the world was hit by the COVID-19 pandemic in early 2020, Azerbaijan took its role as the chair of the Movement responsibly and undertook serious efforts to ensure the Movement’s adequate and timely response to the challenges caused by the pandemic. Azerbaijan put forward a number of initiatives to consolidate global efforts against the pandemic. We initiated and held the NAM Online Summit at the level of Heads of State and Government in May 2020. As a practical outcome of the Summit, a database encompassing the basic humanitarian and medical needs of NAM Member States was created, and the World Health Organization uses the database as a reference point for identifying the existing needs of NAM Member States in addressing the pandemic.

Further to my suggestion at the Summit, which was later supported by more than 150 UN Member States, the Special Session of the UN General Assembly in response to coronavirus at the level of the Heads of State and Government was held in December 2020.

Azerbaijan also made voluntary financial contributions to the World Health Organization in the amount of $10 million, half of which was a direct assistance to the NAM Member States. Furthermore, we provided direct financial and humanitarian assistance to more than 30 countries, including NAM members, to support their fight against the coronavirus. More than 150 000 doses of the COVID-19 vaccine have been donated by Azerbaijan to 4 countries free of charge.

Azerbaijan has been vocal in expressing its discontent against the stockpiling of vaccines by some wealthy countries and the “vaccine nationalism”. Such actions prevent most of our fellow NAM countries from protecting their population. The disparity in vaccine access is huge. According to international reports, while more than 75 percent of the world’s vaccine doses have been purchased by 10 wealthy countries, the vaccine coverage in low-income countries is less than 2 percent.

This March, with the initiative of Azerbaijan, as the chair of the NAM, the UN Human Rights Council unanimously adopted a resolution on equitable and universal access to vaccines. We are also planning to put forward, on behalf of the NAM, a similar initiative at the UN General Assembly during this session, and we count on your support.

Unfortunately, double standards and selective approaches applied with respect to the norms and principles of international law and decisions of international organizations have been negatively affecting the fair and just settlement of conflicts throughout the world. Azerbaijan has also been affected by such a selective attitude for the last three decades.

Benefiting from the double standards thriving in international relations, Armenia, in blatant violation of norms and principles of international law, was able to keep under occupation almost 20 percent of the territory of Azerbaijan for about 30 years; conducted ethnic cleansing against Azerbaijanis, both in its own territory and in the occupied territories of Azerbaijan; committed Khojaly genocide in February 1992, killing hundreds of civilians including 106 women and 63 children; violated basic human rights, including the right to return of more than one million of Azerbaijani refugees and IDPs.

However, Armenia did not face any sanction for its military aggression and refusal to implement the four resolutions adopted by the UN Security Council in 1993, which demanded immediate, complete, and unconditional withdrawal of armed forces of Armenia from Azerbaijan’s occupied territories. No difference was made between the aggressor state and the state that has faced an occupation. On the contrary, Armenia was consolidating the occupation, committing war crimes, conducting illegal settlement and illicit exploitation of natural resources and destroying the cultural and religious heritage of Azerbaijani people.

Inspired by impunity, Armenia went even further through threatening Azerbaijan with a new war for new territories and resorting to military provocations along the state border and the former line of contact.

On September 27th 2020, Armenia launched a large-scale military attack against Azerbaijan. In response, Azerbaijani Army conducted a counter-offensive operation in its own territories and liberated its occupied territories.

Totally defeated in the course of the 44-day Patriotic War, Armenia had to sign an act of capitulation on 10 November 2020. Azerbaijan, by itself, ensured the implementation of the abovementioned UN Security Council resolutions; resolved the 30-year-long conflict and restored its territorial integrity and historical justice by military-political means. The Nagorno-Karabakh conflict is left in the past.

During the time of occupation, Armenia deliberately destroyed cities and villages, all cultural and religious sites of Azerbaijan in the occupied territories. The aim of Armenia was to erase the traces of Azerbaijani people living in these territories for centuries.

This year, the Member States of the Movement unanimously decided to extend Azerbaijan’s chairmanship for one more year until late 2023. We highly appreciate this as the sign of recognition of Azerbaijan’s successful and effective steering of the Movement. Azerbaijan will continue to work towards further strengthening the solidarity within the NAM and uplifting the Movement’s political weight and global visibility.

We have suggested convening a high-level meeting of the NAM Member States to exchange views and formulate the position of the Movement concerning the post-COVID-19 period. It would be rational for the NAM to advocate for the creation of a UN High-Level Panel on Global Recovery from the Covid-19.

A week ago, the chairmanship inaugurated the NAM Youth Network.

To conclude, I assure you that Azerbaijan as the chair of the NAM will spare no effort to further strengthen the NAM’s role in addressing global challenges in the international relations and defend justice, international law and the legitimate interests of the NAM Member States.