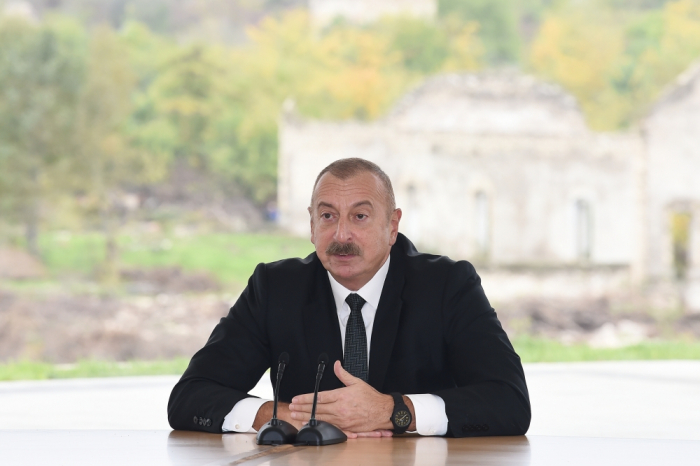 Azerbaijani President Ilham Aliyev addressed the nation on the 30th anniversary of the restoration of the country’s independence.

I sincerely congratulate you on the occasion of the 30th anniversary of the revival of the statehood traditions of our people – the restoration of our independence.

On 18 October 1991, Azerbaijan obtained the opportunity to gain independence for the second time in the 20th century and declared to the world that it was the successor of the Azerbaijan Democratic Republic with the Constitutional Act “On State Independence of the Republic of Azerbaijan”.

In the first years of independence, Azerbaijan was faced with many threats and severe tests. Internal strife, arbitrariness and incompetence in public administration, as well as a severe political and economic crisis, brought the country to the brink of civil war and called its future into question. It was under these conditions that the Azerbaijani lands were occupied by the Armenian armed forces and hundreds of thousands of our fellow compatriots were expelled from their ancestral lands. What was happening was further evidence of the fact that it is far more difficult to preserve independence than to gain it.

In this difficult period in Azerbaijan's history, great leader Heydar Aliyev returned to power at the request of the people. Only then was the threat of losing independence again prevented. In a short period of time, the fundamental principles of our country's independent domestic and foreign policy strategy were identified, public and political stability and state discipline were ensured, and the implementation of democratic reforms and the army-building process began. By signing the Contract of the Century, which has played the key role in the future of the country, Azerbaijan secured a special place on the world energy map, joined the process of integration into the global economic environment and took bold steps leading to future success.

Today, our country is an initiator and active participant in major regional and global projects. Azerbaijan pursues an independent foreign policy based on its national interests and is globally recognized as a reliable partner. In recent years, our economy has more than tripled, strong economic infrastructure has been created, significant progress has been made in the protection, development and promotion of our cultural heritage, education, health and other social spheres, and the material well-being of our people has improved significantly. Despite the fact that 20 percent of its lands were under occupation for almost 30 years and there were more than one million refugees and IDPs, Azerbaijan has always confidently advanced towards its goals and not deviated from its goals.

The logical result of the strategic line to the comprehensive development of Azerbaijan for many years and the continuous work done to further strengthen our country has been the restoration of historical justice – the reinstatement of the territorial integrity of our country. Demonstrating true heroism and patriotism on the battlefield, our brave Army saved our lands from occupation in just 44 days. The Patriotic War waged by the Azerbaijani people resulted in the signing of an act of capitulation on the part of Armenia. Azerbaijan's victory in the Patriotic War has created new realities in our region. Our historic victory is the beginning of a new era in the development of both our country and the region as a whole.

We once again express our gratitude to all our brave sons who gave us the Victory and respectfully commemorate the memory of our martyrs who died for the territorial integrity of our Motherland.

Following the adoption of the draft law put forward on my initiative, 18 October will from now on be celebrated as the Day of the Restoration of Independence in our country. Today, for the first time in our 30-year history of independence, we are celebrating the anniversary of the restoration of our independence as a victorious nation that has restored its territorial integrity. I once again sincerely congratulate all the people of Azerbaijan on this significant event in our recent history and wish you all the best.

Our independence is eternal, irreversible and unshakable!"