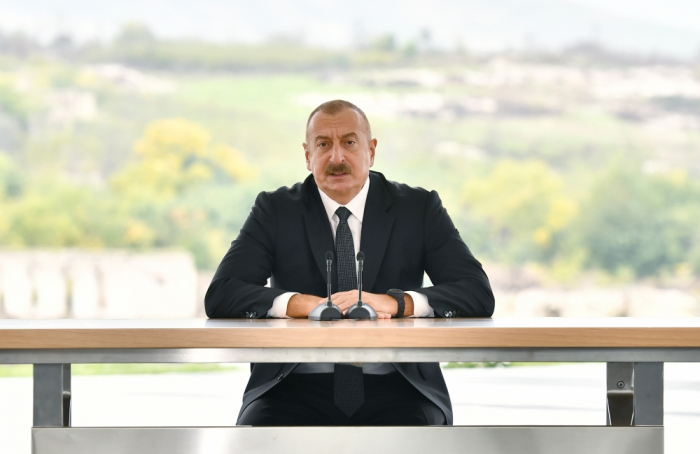 "The liberation of Fuzuli during the war was very important, because it was a large settlement. It was the third largest settlement to be liberated from the occupiers after Jabrayil and Hadrut. There were fierce battles for Fuzuli, and very serious operations were carried out around the city for several days. The enemy put up stiff resistance, but the Azerbaijani Armed Forces fulfilled its historic mission nonetheless. When I shared the news of the liberation of Fuzuli with the Azerbaijani people, the Azerbaijani people and I think the whole world saw that we would complete our glorious mission to the end and that there was no force capable of stopping us," President Ilham Aliyev said.

The head of the state made remarks at his meeting with members of the general public of Fuzuli district.

"The importance of the liberation of Fuzuli also boils down to the strategic location of this city. After Fuzuli came under our control, there were more opportunities for us to go to Shusha. I want to say again that the Armenian side had built very strong fortifications here. There were several lines of fortifications here. For 30 years, the enemy has been reinforcing its positions here, and to be able to break through those fortifications was further evidence of the great heroism and self-sacrifice of our people. Of course, the enemy was scared," President Aliyev said.

The head of the state added: "They saw that our soldiers and officers were ready to die for the liberation of their native lands. Our heroic soldiers and officers, who sacrificed their lives because of these fortifications, showed the enemy the greatness of the Azerbaijani people again. It is no coincidence that after the liberation of Fuzuli, cases of desertion in the Armenian army became even more widespread. The enemy saw that it could not stand in front of us. The enemy saw that the road ahead of us was already clear and the liberation of other cities and districts was inevitable."

"The liberation of Fuzuli gave us additional moral strength. After that, the Azerbaijani Armed Forces successfully continued their salvation mission with even greater resolve. The city of Zangilan was liberated three days after the liberation of Fuzuli, Gubadli five days later and then we accessed the corridor of Lachin. So the outcome of the war was no longer a secret to anyone," President Aliyev noted.