If the Zangezur corridor is not opened, Lachin corridor can be closed - OPINION 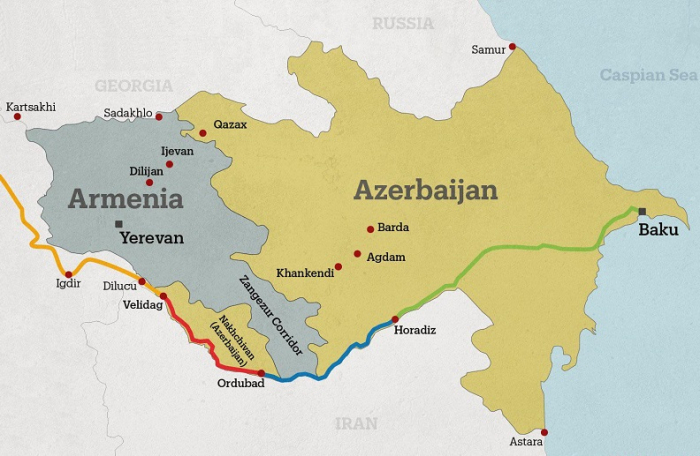 Reacting to the decision on application of customs and passport control at Eyvazli post of Azerbaijan, Armenian PM Nikol Pashinyan said: “It would have been possible to negotiate that there was no control over that section (Eyvazli), but the price for that would have been corridor logic, which was unacceptable for us.”

Following this statement, Pashinyan said that his country supported all the provisions of the trilateral agreement of 10 November, 2020. He also expressed his hope for restoration of all regional communication in accordance with the agreement. It means that generally Pashinyan is not against the opening of Zangazur corridor but tries to realize his certain demands. The statement made by Pashinyan points to his readiness for negotiations.

What could Pashinyan ask in return of the Zangezur corridor? Of course, granting status to Armenians in Azerbaijani territories controlled by Russia. Granting any kind of status to Armenians in Karabakh is important for Pashinyan for several reasons. Firstly, he can somehow get rid of the title of a defeated leader. Secondly, if there is a chance in the future, they can raise the Armenian problem in Azerbaijan again. It is not only significant for Armenia, but also its adherents.

For this very reason, President Ilham Aliyev repeatedly stresses the impossibility of discussion on the status issue: “The status went to hell. It failed; it was shattered to smithereens. It is not and will not be there. As long as I am President, there will be no status. “ Knowing that Ilham Aliyev's words are equal to document, it is obvious why Pashinyan hopes on this issue. The Armenian leader understands that the Zangezur corridor connects not only Azerbaijan and Nakhchivan, but also Azerbaijan and Turkey, Turkey and Central Asia, Pakistan and Turkey, and finally the East and the West. In this regard, the delay in the process is also a concern for the forces interested in opening of the corridor. Yerevan may think that those who are interested in opening of the corridor will somehow influence Azerbaijan to reach an agreement.

Unquestionably, the opening of the Zangezur corridor are also in Russia's economic interests. Russia gets an alternative road and railway directly to Turkey and from there to Europe. Besides, transport links with Armenia will be restored. However, currently Kremlin is calm about Pashinyan's games since the delay in the process is in Moscow's interests. In fact, Russia sacrifices its economic interests for its regional and political interests. After all, there will be no need for Russian peacekeepers after the opening of the Zangezur corridor and signing of a peace agreement between Armenia and Azerbaijan...

What steps will Azerbaijan take if Armenia does not allow the corridor to open?

Armenia's refusal to allow the opening of the Zangezur corridor provides a legitimate basis for Azerbaijan to close the Lachin corridor. Although official documents do not mention the opening of the Zangezur corridor in exchange for the Lachin corridor, the essence is perceived so. In exchange for the Armenians in Karabakh using the corridor through Azerbaijan to communicate with Armenia, the Azerbaijanis will communicate with Nakhchivan through the corridor passing through Armenia.

From this point of view, it is true to state that the failure of the Armenians to open the Zangazur corridor is even in Azerbaijan’s interest. Even we can say that for Azerbaijan, closing the Lachin corridor for Armenians is more important than opening of the Zangezur corridor.

Can Azerbajan close the Lachin corridor? Of course, the issue of Russia will emerge here. Russia may use the excuse that it provides peacekeepers deployed in the territory through Armenia, and therefore the Lachin corridor must remain open. In this regard, Azerbaijan may offer to use the airport in Fuzuli or in Lachin and Zangilan in the future. If Turkey also insists on this issue, Russia can ground the retention of the Lachin corridor only with reference to the statement signed on November 10, 2020. In this case, Azerbaijan will put forward a reason that Armenia violates the agreement by not opening the Zangezur corridor. Moscow obligately will urge Yerevan to open the Zangezur corridor.