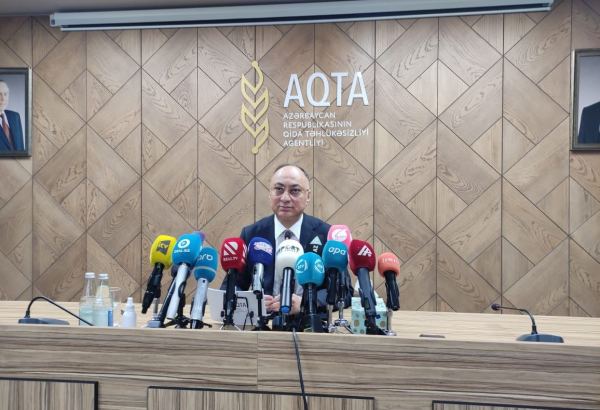 Obstacles for export of crop products from Azerbaijan to Russia were removed as a result of negotiations between the Azerbaijani Food Safety Agency (FSA) and the Russian Federal Service for Veterinary and Phytosanitary Control (Rosselkhoznadzor), Goshgar Takhmazli, chairman of FSA, said at a press conference, AzVision.az reports.

According to Takhmazli, during the last meeting between him and the head of Rosselkhoznadzor Sergey Dankvert, the Russian official highly appreciated the control measures taken by the agency in this area, and also emphasized the role of laboratories working at a high professional level for ensuring food safety.

From December 1, 2021, Rosselkhoznadzor will issue permits for the supply of tomatoes from Azerbaijan to Russia based on a letter of guarantee from FSA, the chairman noted.

"According to the reached agreement, from the mentioned date, monitoring of each batch of exported crop production for the presence of diseases of viral and bacterial origin will be stopped, and the results of monitoring and preliminary laboratory testing carried out in farms by specialists of the Azerbaijan Food Safety Agency will be considered sufficient," Takhmazli noted.

Despite that following the negotiations, the transportation of tomatoes and apples by the railway was extended until April 1, 2022, given the phytosanitary measures implemented by FSA, this period will be increased at the initiative of Azerbaijan, allowing Azerbaijan Railways CJSC to ensure the transportation of crop products in containers meeting international standards.

To eliminate the density of vehicles observed on the border between Azerbaijan and Russia, meetings will be held at the level of deputy chairmen of departments at the Yarag-Kazmalyar checkpoint of the Republic of Dagestan until December 1 of this year.