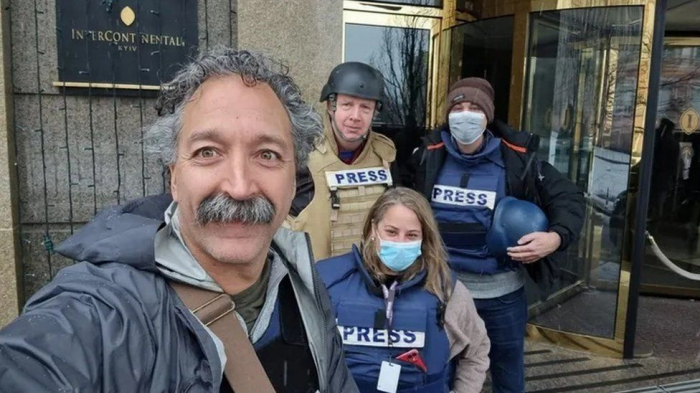 Two journalists working for Fox News have been killed in Ukraine, staff at the US network say.

Cameraman Pierre Zakrzewski, 55, and Oleksandra Kuvshinova, 24, were killed when their vehicle was struck by incoming fire in Horenka, on the outskirts of Kyiv.

Their colleague, Benjamin Hall, 39, was wounded and remains in hospital.

Fox News CEO Suzanne Scott said it was a "heartbreaking day" for the organisation.

Ms Scott said Zakrzewski's "passion and talent as a journalist were unmatched".

"Pierre was a war zone photographer who covered nearly every international story for Fox News from Iraq to Afghanistan to Syria during his long tenure with us," she said.

"His talents were vast and there wasn't a role that he didn't jump in to help with in the field - from photographer to engineer to editor to producer, and he did it all under immense pressure with tremendous skill," she tweeted.

Ms Griffin described Kuvshinova as a "bright light and talented journalist". "The loss we feel cannot be put into words," she said.

Senior field producer for Fox Yonat Friling said Kuvshinova had been working with the team for the past month and "did a brilliant job".

"We have lost a beautiful brave woman" Ms Friling said. "She loved music and she was funny and kind."