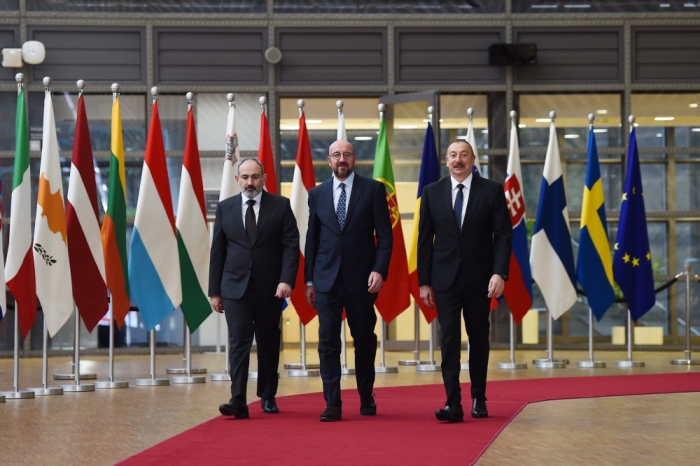 The EU-mediated Brussels summit of the Armenian and Azerbaijani leaders on April 6 raised significant hopes and optimism in the South Caucasus for an eventual breakthrough in the peace negotiations between the two countries. For the first time in the peace process following the 2020 Second Karabakh War, the two sides agreed to launch preparations for a peace treaty. They also pledged to establish an intergovernmental commission on the border delimitation and demarcation by the end of April.

This positive environment was further fostered by the April 13 speech of Armenian Prime Minister Nikol Pashinyan to the Armenian parliament, where he hinted that the potential peace treaty would be on the basis of mutual recognition of international borders and Azerbaijan’s sovereignty over the Karabakh region, adding that the international community wanted Armenia to lower the bar in the negotiations regarding the status of Karabakh. His constructive remarks were lauded by the EU and the United States who considered them far-sighted and important for peace efforts.

Since then, the situation in the region has, however, developed new dynamics – unfortunately not entirely conducive to the peace efforts.  The peace process is now threatened by internal and external elements and runs the risk of being delayed, if not stalled, and this to the detriment of regional peace and security.

Since the April 13 speech of Mr. Pashinyan, some positive developments could indeed be noticed in the relations between Armenia and Azerbaijan. On April 25, for the second time after the latest Brussels summit and, in general in the course of recent decades, the Armenian and Azerbaijani Foreign Ministers talked on the phone without the participation of intermediaries. The parties agreed on the composition of the Joint Border Commission and reached an agreement to hold meetings of the Joint Border Commission in the near future.

This was followed by Azerbaijan specifying the location of two checkpoints on the border with Armenia.  In parallel, President Ilham Aliyev, in a phone conversation with European Union Council President Charles Michel, confirmed that Azerbaijan has determined the composition of the national commission for delimitation and demarcation of the state border between Armenia and Azerbaijan. He also reiterated Azerbaijan’s readiness for negotiations in the “Baku-Yerevan” format which is a new phenomenon in the three decades-old conflict.

This process proceeded with the second meeting of the Secretary of the Security Council of Armenia Armen Grigoryan and Azerbaijan’s presidential advisor Hikmet Hajiyev on May 2. Similar to the earlier meeting, this was organized with the mediation of the European Union and opened the prospect of another leaders’ summit. Grigorian confirmed that such a summit is possible in the near future.

However, not everyone is happy with this course of negotiations. In Armenia, a group of nationalist forces led by the leaders of the former regime, Robert Kocharyan and Serzh Sargsyan, called for nationwide protests in the aftermath of the April 13 speech of Mr. Pashinyan and accused him of rejecting the principle of “the right to self-determination”, and ceding Karabakh to Azerbaijan.  Although these political groups, whose leaders are known for their pro-Russian views, failed to attract sufficient number of people to trigger a government change, they act as a destructive force and serve as useful tools for the external forces that are interested in the prolongation of the conflict. There is fear on the ground that opposition would become more aggressive and violent, as happened in Armenia in 1999 when a group of nationalists stormed the parliament and killed the political opponents of then-President Kocharyan, who were more inclined to a peaceful resolution with Azerbaijan.

Another challenge in this respect emerged in the reaction of Russia to the EU-mediated negotiations. The West’s refusal to coordinate this process with Russia and its growing mediating role upsets Moscow who sees this as hijacking its dominant power-broker status between Baku and Yerevan. Hence, Moscow seeks to re-activate its engagement with this issue: initiating a trilateral meeting of foreign ministries, re-launching of the working group of deputy prime ministers that was established in January 2021, and convening of the second meeting of the 3+3 regional cooperation platform.

Therefore, Armenia’s renewal of demands for a settlement of the status of Karabakh, following the April 19 Moscow visit of Mr. Pashinyan, was read by some as a setback in the negotiations, one that was triggered by Russia’s interference and the domestic protests.  Subsequently, in early May, Armenia proposed six conditions for a peace treaty with Azerbaijan in response to Baku’s earlier proposal of five conditions. Although the sides have not disclosed the content of Armenia’s proposals, it has been stated by Armenian officials that these are related to the situation in the Karabakh region.

Yerevan had earlier accepted Azerbaijan’s proposals which are basically about the recognition of each other’s territorial integrity and inviolability of international borders. Baku has yet to react publicly to the proposals of the Armenian side, but the hitherto silence hints that these might not be too big to be accepted.

That said, the Armenia-Azerbaijan peace process is passing through a critical stage which will determine the future of the relations between the two countries: Either they will now agree on normalization of relations and put an end to their hostilities, or they will remain stuck in these disputes for years to come. Hopefully, peace efforts will prevail over the agendas of nationalist groups and their external allies.