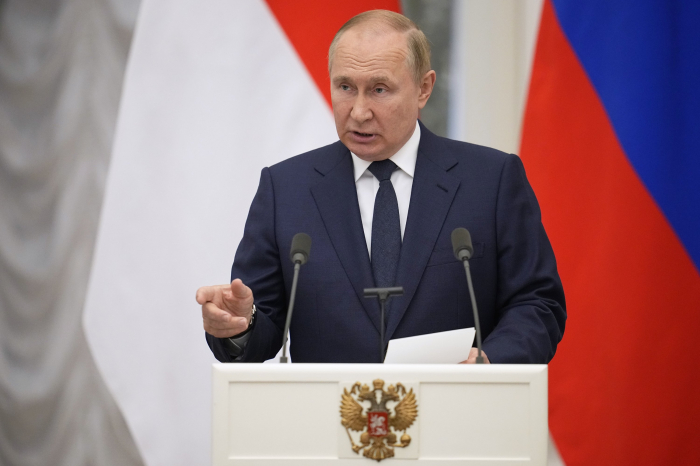 Russian President Vladimir Putin on Thursday called the formation of a multipolar world "irreversible," saying the domination of one country or a group of countries on the global stage is "dangerous."

Addressing the participants of the St. Petersburg International Legal Forum, Putin said: "Russia supports this process, and its position is that this democratic, more just world order should be based on mutual respect, trust, and the generally accepted principles of international law and the United Nations Charter."

"A multipolar system of international relations is now being formed. It is an irreversible process; it is happening before our eyes and is objective in nature," Putin told this year's plenary session, themed "Law in a Multipolar World."

He disagreed with the idea of the law's incapability to adequately respond to the problems and challenges of today.

"Crises happen not because the law is faulty but because of attempts to replace the law with dictate, and international standards with the national jurisdiction of certain states or groups of states in a deliberate refusal to follow essential legal principles-justice, conscientiousness, equality and humanity. These are not just legal ideals, but values that reflect the diversity of our civilization," he said.

According to Putin, some states are not ready to accept losing their supremacy on the international stage and are striving to preserve the unjust unipolar model.

"Under the guise of what they call order based on rules, and other questionable concepts, they try to control and direct global processes at their own discretion, and hold to a course of creating closed blocs and coalitions that make decisions for the benefit of one country, the United States of America," he said.

He added that "the natural rights of others" in international relations are being ignored, the fundamental principle of indivisibility of security is being used selectively, and unilateral, illegitimate sanctions reached an unprecedented scale.

Russia remains open to constructive dialogue, including on ensuring strategic stability, preserving agreements on the non-proliferation of weapons of mass destruction and improving the situation in arms control, he stressed.

"All of these areas require appropriate and flexible legal regulation and meticulous cooperation. With this approach, we could avoid crises such as the current one in Donbass that is happening to protect its residents from genocide – and there can be no other definition for the Kyiv regime's actions than a crime against humanity," he said.

Putin promised that Russia will continue to create "a more democratic and just world where the rights of all peoples are guaranteed and mankind's cultural and civilizational diversity is preserved."

"I am confident that by consistently following international law and joining our efforts, it is possible to resolve the most difficult problems that the world is facing and to provide for the stable, sustainable and progressive development of all states. Both practicing lawyers and jurists can and should bring a significant contribution to the recreation of the authority of law, strengthening its legal institutions and rebuilding trust in international relations," he said.