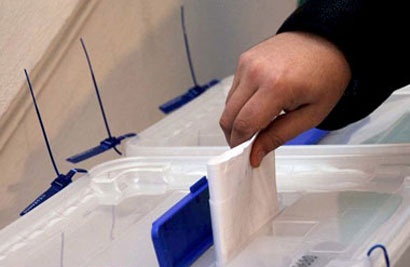 The presidential election voting started in Azerbaijan on Wednesday. Country`s polling stations opened at 8:00 am and will close at 7:00 pm (local time).
The initial data regarding the process of voting and the participation of voters will be publicized five times during the day (at 10:00, 12:00, 15:00, 17:00 and 19:00, local time).

This will be carried out by the Election Information Center that acts under the Central Election Commission of Azerbaijan (CEC).

The initial data on the final results of each candidate will be made public at night.

Starting from the election day, final protocols of district and divisional election commissions on the voting results will be put online, on the website of Elections Information Center.

Initial election results will be put on the CEC website right after district election commissions present the protocols in form of generalized table on electoral districts.

The decision of the Constitutional Court is final. According to part 2 of article 101 of the Constitution, if the presidential candidate collects more than half of the electoral votes, he is considered the elected president of Azerbaijan Republic. The protocol on the results of the Presidential election is published within 24 hours after signing.

According to the article 103 of the Constitution, the inauguration of the person being elected as the president takes take place within three days from the day of Constitutional Court`s official declaration of the data regarding the results of the Presidential election.

The Central Election Commission of Azerbaijan has registered 5,145,000 voters.

Web cameras have been installed in 1000 polling stations in 199 constituencies of Azerbaijan. Unlike in previous years, this time the voting process can be monitored via mobile devices such as smartphones.

Also, the presidential election will be covered by over 70 representatives from over 20 international media outlets.