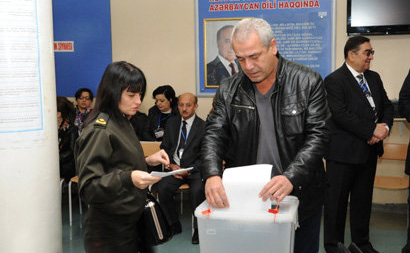 International observers from the European Parliament, the Parliamentary Assembly of the Council of Europe (PACE), the OSCE ODIHR, TurkPA, GUAM, CIS Observation Mission, the Interparliamentary Assembly of the CIS and others, as well as representatives of diplomatic missions accredited in Azerbaijan, observe the voting process at presidential elections in the republic.
Elections are held with active participation of the voters, in peaceful atmosphere.

The presidential election voting started in Azerbaijan on Wednesday. Country`s polling stations opened at 8:00 am and will close at 7:00 pm (local time).

The Central Election Commission of Azerbaijan has registered 5,145,000 voters.