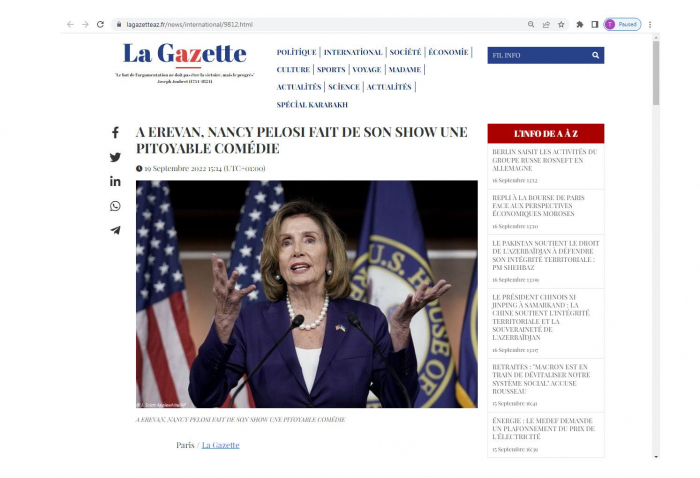 The French La Gazette online newspaper published an article about the recent visit of Speaker of the US House of Representatives Nancy Pelosi to Yerevan amid tensions on the Azerbaijani-Armenian border, her insincere promises to Armenians and anti-Azerbaijani statements, AzVision.az reports.

According to the article, this visit doesn’t serve either the political and economic interests of the US, or the establishment of peace and stability in the region.

As the article said, one of the reasons for the US official’s visit to Yerevan and her statements against Azerbaijan is that Pelosi is one of the major defenders of Armenian interests. Besides, the article named as one of the main factors the upcoming midterm election in the US.

Mentioning political and economic consequences of the visit, the article stressed that the main goal of Yerevan now is to get out of the most difficult economic and political situation in which it has found itself with minimal losses.

“Yerevan pins its hopes on the US. Given the US strategic goals, Armenia is of no importance to it, and Washington is unlikely to fulfill any of the promises made to Yerevan. The losers will be the Armenian society and political authorities of the country, who aren’t aware of the current realities,” the article said.

At the same time, according to the article, Azerbaijan is a key state in the South Caucasus and plays an important role in ensuring the energy security of Europe.

“Pelosi knows that the US has little economic influence on Azerbaijan, even on the contrary, Washington has high economic expectations from Baku. However, trying to enlist the support of Armenians in the election, she doesn’t hesitate to act against the global interests of the US, and to make statements which threaten the future peace and stability in the region," added the article.