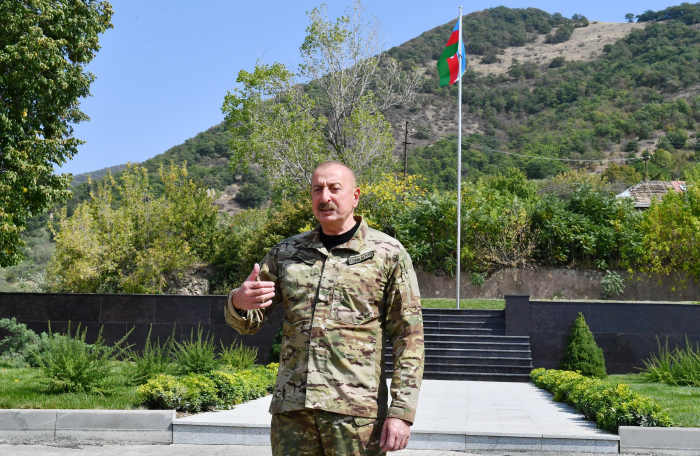 There are traces of Armenian vandalism in every village and city, Azerbaijan’s President Ilham Aliyev said after raising the Azerbaijani flag in the city of Lachin, AzVision.az reports.

The head of state noted that as is the case with Lachin district and indeed all other residential settlements under occupation, the city of Lachin was exposed to Armenian vandalism.

“There are traces of Armenian vandalism in every village and city. The city of Aghdam was completely razed to the ground. So were the cities of Fuzuli and Jabrayil, as well as all our villages. In some places, including Lachin, Armenians conducted illegal settlement, as Armenians from Armenia and mainly from abroad – Syria and Lebanon – were brought here. This is a war crime. This is defined as a war crime in all international conventions, and this crime took place right before the eyes of the world community,” he added.

The Azerbaijani leader stressed that most of the city of Lachin has been destroyed and razed to the ground.

“Illegal settlement was carried out in some places. The world community, international organizations, including the co-chairs of the Minsk Group who were directly dealing with this issue, were simply turning a blind eye to that. However, they had seen this scene many times, multiple times. Going from Armenia to Karabakh and from Karabakh to Armenia by this road, they saw that illegal settlement was taking place here. They saw that Azerbaijani place names were being removed. They saw that Lachin, our historical and ancient Azerbaijani land, was being Armenianized and that illegal settlement was being carried out here. But they turned a blind eye to that, as if showing their tacit consent. We, the people of Azerbaijan, could never put up with this. I always said that we would never allow a second Armenian state to be created on our lands,” President Aliyev concluded.