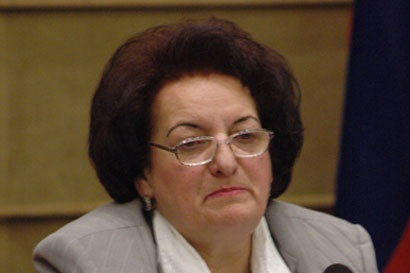 Commissioner for Human Rights (Ombudsman) of Azerbaijan has not received any appeals and complaints regarding voting in the presidential election, Azerbaijani Ombudsman Elmira Suleymanova told journalists on Wednesday.
According to Suleymanova, they observed the electoral process at 30 polling stations in 11 districts of Baku.

"We also kept in touch on phone with all regions of the country, and our staff were working with all authorities. We have not received complaints or any appeals regarding the presidential election. I personally talked with representatives of the various candidates. They did not express any concern," the Ombudsman said.

Suleymanova also said that she talked with international observers who monitored the election process. According to her, the representatives of OSCE`s various organizations, as well as the observers from the U.S., Sweden, Pakistan and other countries underscored that the election is being held at a high level and all the necessary measures had been taken for this.

"They have expressed their opinion on the election this way: a lot of things can be learnt in the electoral process in Azerbaijan," Suleymanova said.

The presidential election voting, which took place on Wednesday, was completed in Azerbaijan.

The Central Election Commission of Azerbaijan has registered 5,145,643 voters.

In connection with the presidential election, the Central Election Commission of Azerbaijan established 5,273 permanent and 219 temporary polling stations.

Web cameras have been installed at 1000 polling stations in 119 constituencies of Azerbaijan. Unlike in previous years, this time the voting process was monitored via mobile devices such as smartphones.

Totally, 52,000 people observed the election in Azerbaijan, nearly 1,400 of which were international observers.

Also, the presidential election was covered by over 70 representatives from over 20 international media outlets.