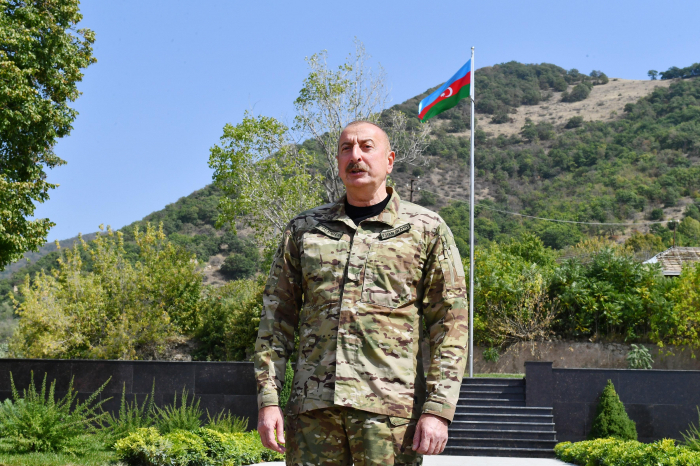 The Azerbaijani leader noted that after the April battles, Armenia was frightened and was actually ready to withdraw its troops from the occupied lands.

“It even promised to do so. However, it did not keep its word afterwards. The April battles were not a lesson for them. Two years later, the “Gunnut” operation was carried out in Nakhchivan and strategic heights were taken under control. This did not teach them a lesson either. Finally, the second Karabakh war culminated in a complete defeat of the Armenian army, as the victorious Azerbaijani Army liberated our native lands. We thought that this would teach them a lesson at last because the Armenian army is in a completely destroyed state. A country with 10,000 deserters is not capable of waging war – neither physically nor morally,” he said.

“We offered them peace immediately after the war. This is perhaps one of a handful examples in the military history of the world when lands remains under occupation for 30 years, people live in suffering and deprivation, historical and religious monuments are destroyed, cities are razed to the ground, more than a million mines are planted, and yet we are offering peace. However, we see again that Armenia is not interested in peace. It is still cherishing some revanchist ideas. We proposed to them to start the delimitation process. This process has stretched out over about a year. Now, although this process has started, it is purely formal in nature, there are no negotiations on the substance of the issue and no discussion around maps. We have prepared all the maps – both maps of the 20th century and maps of the previous era. The process of delimitation should be carried out on the basis of these maps,” President Aliyev added.