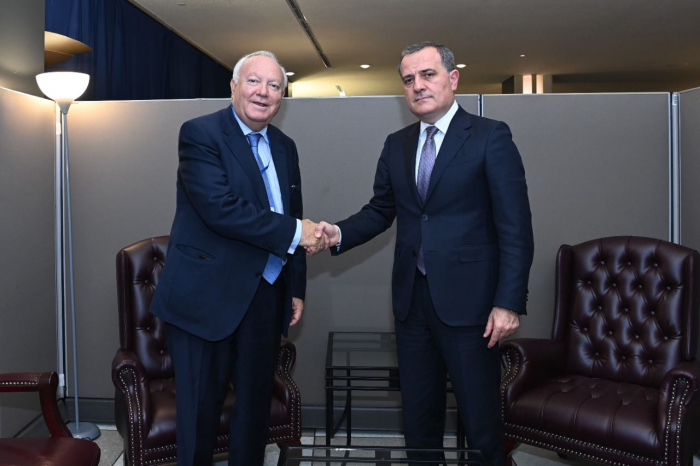 Within the framework of the high-level week of the 77th session of the UN General Assembly in New York, the Minister of Foreign Affairs of the Republic of Azerbaijan Jeyhun Bayramov met with the High Representative of the UN Alliance of Civilizations (UNAOC) Miguel Angel Moratinos, AzVision.az reports.

Minister Jeyhun Bayramov expressed satisfaction with the high level of development of cooperation with the Alliance of Civilizations. As a multinational, multi-confessional country, Azerbaijan is distinguished by an atmosphere of dialogue and tolerance at the national level, and also attaches great importance to the promotion of these values ​​at the international level.

Noting that the post-conflict period opens up new opportunities in the region, Jeyhun Bayramov stressed that the UN Alliance of Civilizations has favorable opportunities to promote peace both in the region and between countries. Informing about the work carried out in the field of restoration of monuments destroyed during the occupation in the territories liberated from the occupation, the minister emphasized the support provided by the organization in this direction. Jeyhun Bayramov informed the other side about the consistent steps taken in the field of restoration and protection of cultural heritage in the territories affected by the conflict, ensuring the same rights for the Armenian residents of these territories, as well as all citizens of Azerbaijan, and stated that he was determined to take steps to reintegrate them into the social - economic space.

Miguel Angel Moratinos, in turn, expressed gratitude for cooperation with Azerbaijan. Moratinos stressed the importance of the "Peace for Culture" campaign initiated by Azerbaijan and the Action Plan signed with the Alliance in this direction. At the same time, it was stated that the steps actively taken by Azerbaijan in the field of inter-religious and inter-civilizational dialogue are significant and indicative.

The parties exchanged views on the preparations for the 9th event of the Alliance, which will be held in Morocco in November this year.