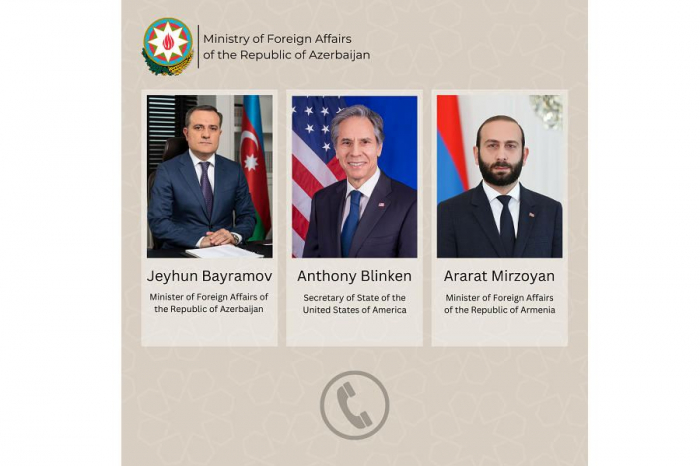 The phone conversation with the participation of the U.S. Secretary of State, which was the follow-up of negotiations in Geneva on October 2, 2022 organized in accordance with the task given to the Ministers of Foreign Affairs on drafting the text of the peace treaty as a result of the Brussels meeting of 31 August, 2022, between the leaders of Azerbaijan and Armenia with the participation of the President of the Council of the European Union Charles Michel, as well as of the meeting of September 19, 2022, between the Foreign Ministers of Azerbaijan and Armenia organized by the US Secretary of State in New York on the sidelines of the 77th session of the UN General Assembly, and the meeting of September 27 in Washington, DC, between the Assistant to the President of the Republic of Azerbaijan, Hikmat Hajiyev, and the Secretary of Security Council of Armenia, Armen Grigoryan, with the participation of Jake Sullivan, the National Security Adviser of the U.S. President, was highly appreciated.

During the phone conversation, Minister Bayramov brought to the attention the details of the Geneva meeting. The expectations about the continuation of the negotiations on the text containing the elements of the peace treaty proposed by Azerbaijan during the Geneva meeting, was emphasized. Based on the results of the Geneva meeting, in order to eliminate the recent tensions on undelimited border, holding the next meeting of the bilateral commission on delimitation in October and the call for conducting negotiations on these issues within the framework of the commission was welcomed. Minister Bayramov once again stressed Azerbaijan’s commitment to ensure peace and stability in the region, and readiness to sign a peace treaty. At the same time, the Minister pointed out that in the post-conflict period the work will be continued in the direction of the reintegration of the population of Armenian origin living in the Karabakh region of Azerbaijan.

The Secretary of State of the United States Antony Blinken has emphasized that it is important to avoid military clashes, to speed up the negotiations on the elements of the proposed peace treaty, and to continue the work within the framework of the delimitation commission.

During the trilateral phone conversation, the sides exchanged views on other aspects of the normalization process, and it was agreed to continue contacts in order to make substantial progress on the issues.


More about: Azerbaijan   US   Armenia