The MPs stressed that the new agreement would contribute to improving relations between the two countries.

Following the discussion, the document was put up for voting and adopted. 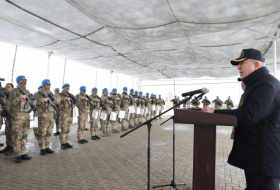