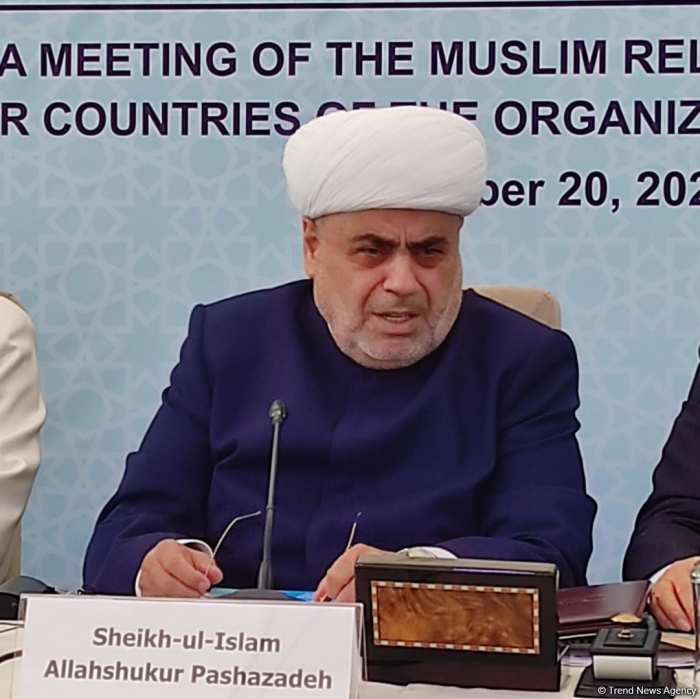 Armenian Apostolic Church stands at the forefront of Armenian revanchism, Chairman of Azerbaijan's Caucasian Muslims Office (CMO) Sheikh-ul-Islam Allahshukur Pashazadeh said on October 20 at the meeting of Muslim religious leaders of the member countries of the Organization of Turkic States in Shusha, AzVision.az reports.

According to Pashazadeh, at the cost of the blood of martyrs, the Azerbaijani people liberated their ancestral lands from Armenian occupation and restored justice.

"Azan sounds in our mosques, and we are carrying out construction work on our lands. The whole world witnessed Armenian vandalism, war crimes, the genocide committed in Khojaly, the deliberate destruction of our cities and villages, the arson of our lands, the poisoning of our reservoirs, the destruction of cemeteries, mosques and temples, and the mines set by Armenia still continue to kill hundreds of civilians," the official said.

The chairman of CMO noted that the Armenian religious circles call for hatred.

"The Armenian Apostolic Church promotes revenge, and conducts a smear international campaign against Azerbaijan. The revanchist statements of the Armenian Church leadership, which for many years justified the criminal actions of Armenian political leaders, in Khankandi, are regrettable,” Pashazadeh emphasized.

“With a Bible and a gun in their hands, they blessed death, occupation, oppression and violence, ignoring religious values and bringing new tragedies to the Armenian people instead of the promised happiness,” he also noted.

“The Armenian Church must show wisdom, preach ideas that will save the people, bring them prosperity and progress. From the liberated Shusha city I call on the Armenian Church, Etchmiadzin to put an end to the hatred, sabotage and revanchism,” the official pointed out.

“Fulfilling your spiritual duty to the Almighty, you should call for life instead of death, new disasters and tragedies! Telling the truth instead of false promises will be your greatest historical service to the Armenian people," he concluded.