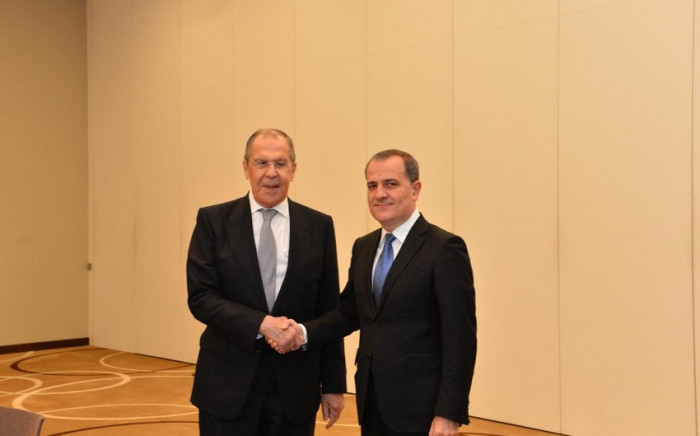 The Ministry of Foreign Affairs of the Republic of Azerbaijan has shared updates on the results of Minister Jeyhun Bayramov's visit to Russia on December 5, AzVision.az reports.

The statement said, Bayramov laid a wreath at the Tomb of the Unknown Soldier near the Kremlin Wall first. Then the minister held bilateral and expanded meetings with his Russian colleague Sergey Lavrov with the participation of the delegation.

The sides discussed relevant topics of Azerbaijan-Russia cooperation, including economic, educational, transport, and other issues, as well as the normalization of relations between Azerbaijan and Armenia, and the implementation of trilateral statements.

Minister Bayramov praised the high-level dialogue and engagements between Azerbaijan and Russia. Noting that this year marks the 30th anniversary of establishing diplomatic relations, the minister outlined various events that took place on this occasion, and which will contribute to the development of bilateral relations.

The official also informed on the peace agenda as part of steps taken by Azerbaijan in the post-Karabakh conflict period. He expressed concern about Armenia's attempts to impede the peace process, its failure to fulfill the trilateral statement, in particular paragraphs 4 and 9, as well as an incomplete withdrawal of Armenian troops from Azerbaijani territories.

Speaking of the existing landmine threat in the liberated territories, Minister Bayramov said the discovery of Armenia-made explosive mines testifies to Armenia's infringing upon its obligations, thus hindering the peace process. Along with this, the sides addressed the issue of illicit exploitation of mineral resources in Azerbaijani territories of Russian peacekeepers' temporary deployment.

Following the expanded meeting, the ministers signed a plan of political consultations for 2023-2024.

Then, a ceremony was held to cancel postage stamps dedicated to the 30th anniversary of Azerbaijan-Russia diplomatic ties with a special stamp. The second volume of the newly published collection of documents signed between Azerbaijan and Russia was also presented.

The meeting was followed by a joint press conference of the Azerbaijani and Russian foreign ministers. During the conference, the ministers made statements and answered media questions, the statement said.