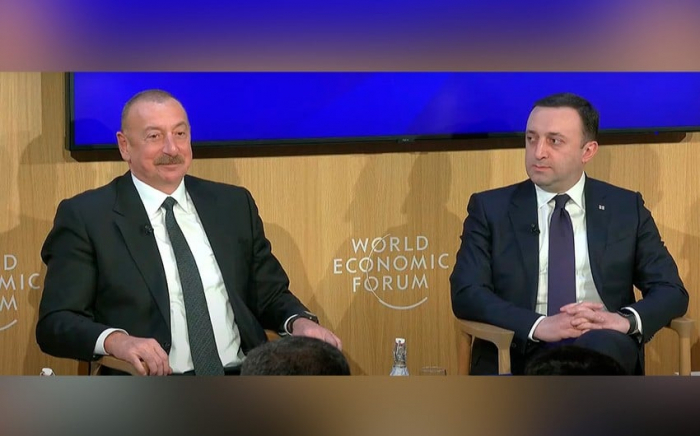 Azerbaijani President Ilham Aliyev has participated at a panel discussion on the topic "Eurasia's Middle Corridor: From Pathway to Highway" within the framework of the World Economic Forum in Davos (Switzerland).

The head of state responded to questions from the moderator.

Moderator: First, I would like to go to President Aliyev and Prime Minister Garibashvili. We have seen a series of multi-party agreements around the Middle Corridor recently. So, what can we expect at the intergovernmental level along this axis in the coming year or even beyond that? Let me start with you, Mr. President, and then I will go to you, Mr. Prime Minister.

President Ilham Aliyev: Thank you. I think one of the advantages of the Middle Corridor is, as the countries, which are involved in this huge project, have good relations between themselves. I think this is one of the main prerequisites for success in any multinational initiative. Azerbaijan has excellent relations with its neighbors to the West - Georgia and Turkiye and to the East - Central Asia. And being a kind of a natural geographical bridge between East and West, we have invested largely into transportation infrastructure in the previous years. Actually, all the necessary infrastructure facilities in Azerbaijan are ready to receive more cargoes. Our seaport, which has a capacity of 15 million tonnes, will be expanded up to 25 million tonnes, and already a budget is allocated for that. Because we expect a growing number of cargoes for particular reasons, which you mentioned, the difficulties of transportation through traditional Northern route. We have already seen the diversion of a large number of cargoes from Central Asia, and this is only the beginning. Also, I'd like to add that starting from this year, we started to transit oil from Kazakhstan, not only from Turkmenistan, which already takes place for many years, with the potential to use this corridor also for hydrocarbons. Therefore, I think that we now need to have closer cooperation between all the countries involved - Central Asia, Caucasus and Europe - in order to work actively on customs administration, to have more or less a single window approach and on tariffs policy. Because we need to make this route not only attractive from the point of view of absence of other routes, but attractive from a commercial point of view. And by the way, when we started our meeting, I noticed that we sit the same way how our pipeline goes.

Moderator: But I'm from Czech Republic.

EU Commissioner for Budget and Administration Johannes Hahn: We are working on reverse flow. Thank you.

Moderator: Back to you, Mr. President, and then also to you, Mr. Prime Minister. On the governance of the project, if you can share it, there are some ideas in the future, how it will look like. And then also on the market. So what are your thoughts about how this is, of course, not only a tunnel, but it's actually an ecosystem, maybe that is benefiting and maybe creating a new regional market?

President Ilham Aliyev: Yes, I fully agree with the comment of Madame Ebru. Because, really, she was very right to say it's not just a corridor and as the commissioner said, it's not a tunnel. And we have big expectations. Of course, becoming a transit country, in the sense of today's reality, is important. But for us, the most important thing is jobs and local production. For that purpose, we are working very hard on diversification of our economy. And we think that the transportation not only will be helping us to diversify our exports, so, we will export the services. But, at the same time being on route on the Middle Corridor, at the same time being on route of the corridor North-South, creates additional opportunities for business in Azerbaijan. Soon there will be the inauguration of a free zone in Baku, which is just next door to the seaport. And we hope that these free zone will be a place of manufacturing and the place where companies will find itself appropriate to invest. Improvement of business climate, of course, is one of the main factors of success, because all the countries in the world, even the most developed, they need additional investments. And here, only business climate, of course, is not enough. We're coming back to from what we started, and what Prime Minister Garibashvili said about the relationship between the countries. This is really, I think, unique situation, I think, most friendly environments on global scale relationship between Azerbaijan and Georgia, Azerbaijan and Turkiye, Georgia and Turkiye and trilateral. By the way, we have several formats of trilateral cooperation - ministers of foreign affairs, defense, economy. There also was the leaders’ summit and we started sharing the profit. We started clearly understanding that should be a balance - we started with energy project definitely - between producers, transitors and consumers. And we managed to create this win-win situation and how to say balance of interests was preserved. So actually, the railroad connections which we built relatively recently, and which we will expand now from Azerbaijan, Georgia, Turkiye and down to Europe, was inspired by our successful implementation of oil and gas pipeline projects. So, on this side of the corridor, I think everything is settled. Now what we need, we need to create and I again want to agree with Madame Ebru that there should be kind of a steering committee. What kind of a management board of all countries involved - Central Asia, Azerbaijan, Georgia, Turkiye, European partners - including all the transportation infrastructure. For instance, we have the biggest trade fleet in the Caspian with 53 vessels, seaports - railroad connections between Turkmenistan, Kazakhstan, Azerbaijan, Central Asian countries, they're also you know that not well connected between themselves. And there are new projects, for instance, projects which China is now initiating - the China-Kyrgyzstan-Uzbekistan railroad. The project, which eventually will come to the Caspian and then further down in our direction. But also important is to work not only on transportation and advantages of East-West, but also West-East. So far, the most attention is how to bring cargoes from China, Central Asia through Caspian to Europe. But, we also need to think how to have the cargoes in opposite direction. And for that, of course, the business climate in opposite directions should also be in line with our targets.

Moderator: Since I have you here, Mr. President, I need to, of course, ask you about energy as well. Specifically, this is webcast. So there's also this value of really updating the general public on where we are. Well, what would be your, what is the state of play in terms of I know you've boosted the delivery of energy to Europe. I mean, it's sort of a miracle frankly. But if you could kind of update us on your thinking for this coming year and strategically, maybe for the next decade, both on gas but also if you could tell us around the plans of Azerbaijan, which I know you have also run green energy.

President Ilham Aliyev: With respect to natural gas, as soon as we got the request from European Commission, we started immediately to work on different directions. First, physical increase of production and then efficiency, reduction of losses, and looking where else we can save gas, which we use for domestic purposes, and to channel it to the European market. 2021 - our export to EU market was something more than 8 billion cubic meters. This year, it will be at least 11.6 billion cubic meters. And so the growth is very rapid of total 24 billion cubic meters. The MoU, which was signed between European Commission and Azerbaijan this summer, presumes that by 2027 we will double the supply. So, the supply to European Union will be minimum at the level of 20 billion cubic meters. For that there should be more interconnectors in Europe. And one of them in the end of the last year was inaugurated - Greece-Bulgaria. This allowed us to start to supply to Bulgaria and starting from this year to Romania. At the same time, we need to expand brand new facility, which Limak also contributed to TANAP from 16 to 32 billion cubic meters and TAP from 10 to 20 billion cubic meters. And you can imagine, TAP was inaugurated only two years ago. And we thought that this is the volume which Europe will need for long term. But now we need to expand. So, it will be additional financing and we are ready to do it. So, we are really working very hard in order to satisfy the growing needs of European consumers. On green energy, the potential is huge. Caspian Sea wind potential is 157 gigawatts, the onshore potential is 27, and 10 gigawatts potential is in the territories which we liberated two years ago during the Patriotic War. So, almost 200. As the Prime Minister mentioned, last December we signed an agreement in Bucharest to build the Subsea cable from Georgia to Romania and the capacity of this cable will be four gigawatts. Now the feasibility study is underway. As soon as it is ready, we will think about the composition of financing and, of course, we'll need the support of European financial institutions. The agreement signed with Masdar will by 2027 add four gigawatts of production of wind and solar, and six to come by 2037. An MOU with Fortescue Future Industries provides investments up to 12 gigawatts in Azerbaijan. So really, it's a new chapter of our energy policy. Oil is done, and gas is done. Electricity, green hydrogen, and all that is in our plans.

Moderator: Thank you. One more thing to Mr President. We have about three minutes left but I of course, it's top of mind and I think, Commissioner, you mentioned that a lot of people think that if there is economic integration then there's also more stability and peace. So if you could tell us about your relationship with Armenia? What can we expect on the, how can we have lasting peace from your perspective? Where are we?

President Ilham Aliyev: Two minutes will not be enough to tell the story.

Moderator: But where are we now?

President Ilham Aliyev: We are in the middle of nowhere because unfortunately, Armenia did not respond to our proposal to sign a peace deal, which will be very simple and which will be based on the fundamental principles of international law. Commissioner Hahn hinted to the absence of Armenia here, he said, there are two South Caucasian countries but there are at least three. I know whom he meant. But why Armenia is not here, our proposal with Georgia to start a trilateral format of cooperation was rejected by Armenia. I highly value the efforts of my friend Irakli Garibashvili, who hosted a meeting of foreign ministers of Azerbaijan and Armenia, and a Georgian colleague joined. So, our suggestion was for leaders to meet in Georgia. Because Georgia always historically was a place where all the neighbours met, but Armenia is not ready for that. And this is one of the potential risks because if three Caucasian countries unite their efforts in energy transportation, security stability, and border delimitation, the region will be much safer.