Action in support of Azerbaijani environmental activists held in Davos 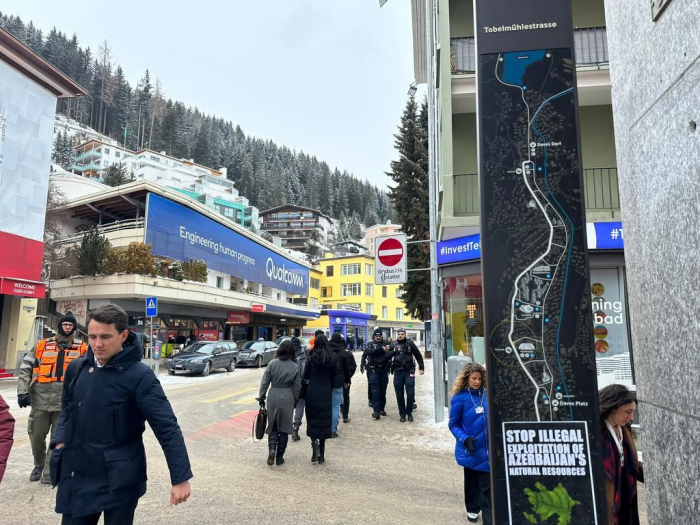 Within the World Economic Forum in Davos (Switzerland), support was expressed for Azerbaijani environmental activists holding a peaceful protest on the Lachin-Khankendi road, the State Committee on Work with Diaspora of Azerbaijan told reporters.

According to the Committee, Azerbaijani activists partook in the action of the Green Up organization in the Promenade Street of Davos.

Compatriots expressed their solidarity with Azerbaijani civil society representatives, holding peaceful protests on the Lachin-Khankendi road, and demonstrated posters with the demands: "Stop the illegal exploitation of Azerbaijan's natural resources!", "Stop environmental terrorism in the territories of Azerbaijan!"

The city residents were updated on the illegal exploitation of Azerbaijan's natural resources by Armenia in the temporary deployment area of Russian peacekeepers.

While addressing the event on "Revamping Investment for Regenerating Nature" in Davos, Member of the Coordination Council of Swiss Azerbaijanis, Ph.D. researcher at the University of Geneva (Institute for Environmental Sciences) Tural Aliyev underscored introducing green technologies and infrastructure, and the sustainable use of natural resources. He noted that the illicit exploitation of mineral resources causes legitimate discontent among the population. The Azerbaijani scientist cited the actions currently being held in Azerbaijan and Germany as an example.

As part of the event, organized jointly with the UN, the EU, and the University of Geneva, posters and booklets depicting the demands of environmental activists were shown.