Calif. lawmakers to weigh in on dispute between Armenia, Azerbaijan 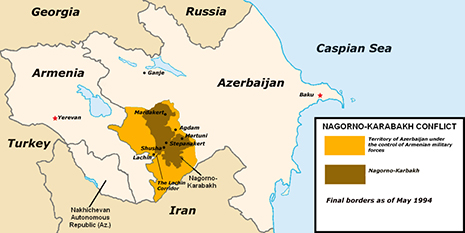 California lawmakers are poised to wade into a long-simmering geopolitical standoff halfway around the world: a conflict between Armenia and Azerbaijan over a semi-autonomous region called Nagorno-Karabakh.


A measure now making its way through the Assembly expresses support for Nagorno-Karabakh`s independence -- a departure from U.S. foreign policy, which considers the region to be part of Azerbaijan. The territory is within Azerbaijan`s borders; for decades, the two countries have disputed over the region and peace talks have mostly stalled.

Sevak Khatchadourian, chairman of the Armenian Council of America, said Nagorno-Karabakh`s independence is a matter of human rights and self-determination. The matter has particular resonance for the Armenian diaspora, including those in the United States.

"It`s very disturbing and concerning to us that the California Legislature would even consider such a resolution," he said.

The measure, by Assemblyman Mike Gatto (D-Los Angeles), is a symbolic one, conveying the Legislature`s backing of Nagorno-Karabakh`s independence to President Obama and Congress. But the resolution -- versions of which have been passed in a handful of other states such as Louisiana and Rhode Island--diverges from the State Department at a particularly sensitive time, when the upheaval in eastern Ukraine has cast a specter over the entire region.

"I really, really wrestled with whether this was an appropriate action by the California Legislature," Gatto said in an interview. He noted that state lawmakers occasionally wade into international affairs, such as voting in favor of divestment from South Africa during the apartheid era and condemning Russia`s treatment of gay people in advance of the Sochi Olympics.

"Every once in a while, when there`s an issue of moral importance, it`s appropriate for California to weigh in on foreign policy," said Gatto, whose district is home to a large Armenian population.

The resolution, AJR 32, will be considered by the Assembly Rules panel Monday afternoon, and members of both the Azerbaijani and Armenian communities plan to attend. Gatto said he`s prepared for an emotionally charged hearing, a departure for a committee that typically deals with legislative procedure.

"It`ll be tough," he said. "There will be a lot of passion on both sides. It`ll probably be the longest Rules committee hearing in recent memory."