Rouhani reintroduces Iran to Europe in wake of nuclear deal 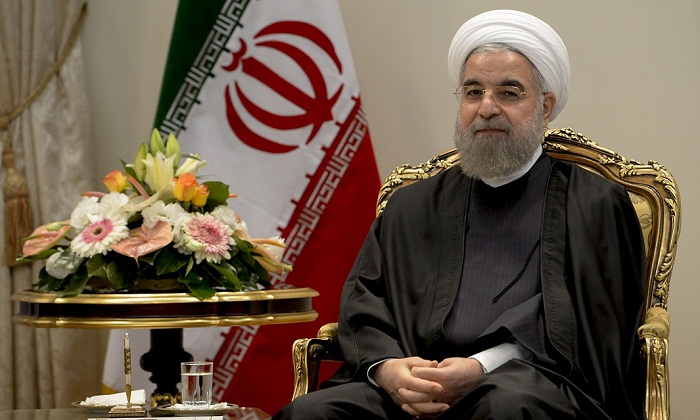 President braves hardliners
The Iranian president, Hassan Rouhani, is embarking on a major European visit, the first such trip in more than a decade, in order to reintroduce Iran into a continent that was the country’s largest trading partner before sanctions.

Bolstered by the landmark Iranian nuclear agreement, the moderate cleric is due in Rome on Saturday and Paris next week on consecutive official visits he hopes will revive Iran’s global image and rebuild economic ties. The trip comes a few months after Tehran agreed to roll back its nuclear activities in exchange for the lifting of sanctions, including an end to the EU embargo on imports of Iranian oil.

It will be Rouhani’s first official visit to Europe and also the first to the continent by an Iranian head of government since 1999 when the former reformist president, Mohammad Khatami, made similar trips to Paris and Rome. Iran-EU ties reached a nadir under the ex-president, Mahmoud Ahmadinejad.

In Rome, Rouhani is expected to meet the Italian prime minister, Matteo Renzi, and Pope Francis, who advocated a peaceful resolution to the crisis over the Iranian nuclear programme and recently urged US Congress not to sabotage the Vienna nuclear accord.

Rouhani’s visits are particularly important because he is facing increasing resistance at home by hardliners not to open up to the west. At international level, Tehran is under pressure to play a constructive role, especially in talks over Syria.

Ahead of Rouhani’s visit, Iran’s hardline judiciary arrested a number of journalists and businessmen. The supreme leader, Ayatollah Ali Khamenei, warned against “an infiltration” into the country’s political system from outside, a signal that he doesn’t want Tehran to be seen as appeasing the west in the light of the agreement. Rouhani’s internal opponents have since capitalised on Khamenei’s talk of infiltration in order to denounce the president.

While in France, Rouhani will aim to present his country as a key regional player with an influential role in determining the fate of Syria, according to Ali-Akbar Mousavi Khoini, a former reformist Iranian MP. After years of operating a de facto boycott of Iran at the Syria talks, Tehran has recently been participating at such events.
“Iran was previously seen as part of the problem in Syria and has just recently been accepted as a country that can play a role in finding a solution to the conflict,” Mousavi Khoini said. “I hope that Europe, France in particular, would listen to what Iran has to say about Syria. France can play an intermediary role between Iran, which has great influence in Syria, and the west. I think Tehran can play a more positive role in Syria now that it has been finally recognised as a stakeholder.”

The French president, François Hollande, will welcome Rouhani at the Elysée palace on Tuesday. But, according to French media reports, a state lunch reception was cancelled because of Iran’s insistence on a longstanding diplomatic protocol that its officials should not participate at events where wine is served.

Rouhani’s visits will be watched closely by European business leaders keen to sell their products in a country of 80 million people and the second largest country in the Middle East. An unprecedented number of European delegations have already rushed to Iran on fact-finding missions even before sanctions are lifted.

Rouzbeh Pirouz, the chairman of Tehran-based Turquoise Partners Group, sees huge potential in the country. “Iran is one of the last great untapped emerging markets in the world; it has 80 million people and a huge consumer market with a switched-on population; everyone has smartphones and they know what’s going on. They are very tech-savvy and consumer-oriented,” he said.

French car companies, especially Peugeot and Renault, are eager to return to business in Iran. Peugeot used to sell 400,000 vehicles a year in Iran prior to international sanctions when an arrangement with local manufacturer Iran Khodro, which assembled the vehicles, meant its cars were ubiquitous across the country. It had to dramatically decrease its operation in Iran because of sanctions three years ago but is now setting its sights on expansion in the country after the lifting of sanctions and looking for partners to build cars locally.

Some continental European companies have been active in pursuing business in Iran and some have even opened offices in Tehran and begun to hire staff. Alstom, the French electricity generation and rail transport firm, is seeking contracts to work on expansion of the metro in Tehran and building two more lines in the city of Mashhad and participate in the electrification of the 600-mile (1,000km) Tehran-Mashhad railway. The French industrial group Bouygues and Aéroports de Paris are in talks with Iran to construct the country’s largest transport project, the second terminal at Tehran’s Imam Khomeini international airport.

Although the EU lifted Iranian sanctions in October, the measures will only come into effect after what has become known as “implementation day”, the unknown date when the UN nuclear watchdog will verify that Iran has taken the necessary steps as outlined under the nuclear deal. Iran is expediting whatever it can to bring this date forward to as early as January but sceptics say it might take a few months longer.