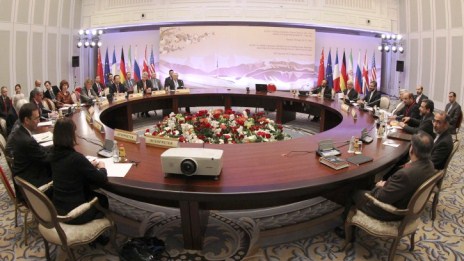 The nuclear negotiations between Iran and the P5+1 group continued today in Kazakhstan, as the sides started the second day of the talks regarding Islamic Republic`s nuclear program, ISNA reported.

Yesterday BBC reported citing a western diplomat, that Iran has failed to deliver a "clear and concrete response" to a proposal aimed at ending deadlock over its nuclear programme.

Tehran said it had offered "specific plans" at the opening of the talks with world powers in Kazakhstan, however the Western diplomat said they were a "reworking" of proposals rejected at last year`s talks in Moscow.

The Iranian chief negotiator, Saeed Jalili, strongly defended its programme ahead of the talks, saying the global community must accept Tehran`s right to enrich uranium.

The previous round of talks was held in the same city from Feb 26-27. A technical round of negotiation was also held between experts of the two sides in Istanbul on March 18.

According to Reuters, some Western officials have been suggesting there could be a chance of diplomatic progress in the long standoff over Iran`s nuclear activities.

The U.S. and its Western allies suspect Iran of developing a nuclear weapon - something that Iran denies.

The Islamic Republic has on numerous occasions stated that it does not seek to develop nuclear weapons, using nuclear energy for medical researches instead.