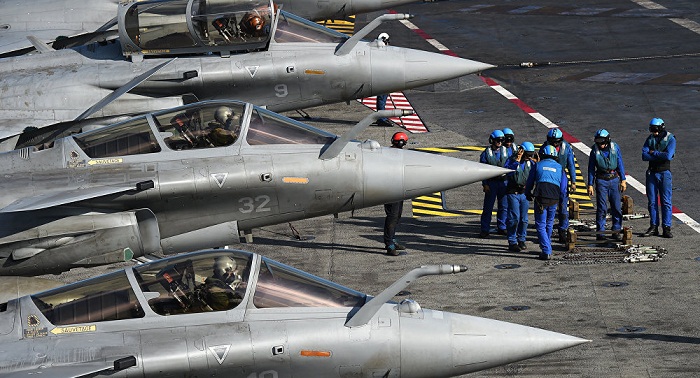 French aircraft carrier Charles de Gaulle will continue its commitment in the fight against Daesh alongside the coalition, according the French General Staff.
French aircraft carrier Charles de Gaulle, deployed to help fight Islamic State (ISIL, or Daesh in Arabic) militants, has left the eastern Mediterranean Sea for the Persian Gulf and taken command of the naval part of the international anti-ISIL coalition, the French General Staff said in a statement on Tuesday.

"The aircraft carrier Charles de Gaulle passed the Suez Canal to reach the Persian Gulf. It also joined the [US-led anti-terrorist coalition] Task Force 50… After the first phase of its involvement in the Eastern Mediterranean (MEDOR), the carrier will continue its commitment in the fight against Daesh alongside the coalition," the statement read.

France is part of the US-led coalition of over 60 countries that has been conducting airstrikes on Daesh positions in Syria and Iraq since 2014.

On November 13, terrorists attacked several venues around Paris, killing 130 people and injuring over 360 more. Daesh, which is outlawed in Russia, claimed responsibility for the attacks.

In the wake of the attacks, French President Francois Hollande pledged to do his utmost to counter terrorism, particularly Daesh. Soon after, the Charles de Gaulle, the flagship of the French Navy and the largest western European warship, was deployed to the Eastern Mediterranean to support the bombing of terrorist targets in Syria.