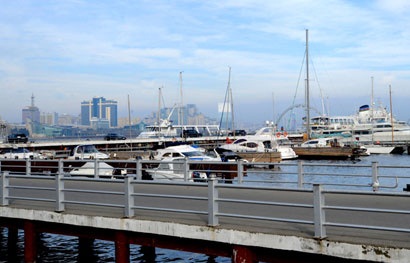 CNN airs story about Azerbaijan"s new seaport
The new port in Azerbaijan will become the largest project for transportation of goods between the regions of the South Caucasus and Central Asia, according to a story on American TV channel CNN.

The International Sea Trade Port in Azerbaijan will become the largest port in the Caspian Sea, CNN reported. It will be receiving loads from Kazakhstan, Turkmenistan and even China which will be transported overland to Georgia, Turkey and Western Europe.
Currently, many investors are backing improvements in the transport infrastructure passing through the region, according to the story.

According to the World Bank representative in Azerbaijan Larisa Leshchenko, the port will not only become a transit corridor, but also a cross-border point with implementation of customs procedures.

In the coming years, the construction of the International Sea Trade Port in Alat will be completed, navy updated and expanded, a transport and logistics center built, the Baku-Boyuk Kesik and the Baku-Yalama railways rebuilt and modernized in accordance with the policy of diversification of the railway network, as well as the Baku-Tbilisi-Kars railway put into operation. The necessary reconstruction of the main railway lines will also be undertaken and wagons and locomotives upgraded. Transition to a system of rods with alternating current will be provided in all directions.