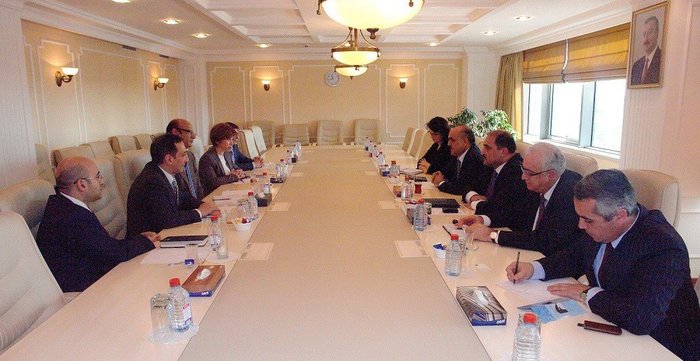 Minister of Labour and Social Protection of Population of Azerbaijan Salim Muslumov has today met a delegation of the Asian Development Bank.

The Minister provided an insight into the dynamics of socio-economic development that Azerbaijan gained in the past period.

"Despite the aggravation of global economic crisis, growing geopolitical and economic tensions in the region, successful reforms courses of the President of Azerbaijan Mr. Ilham Aliyev created the conditions for the macroeconomic situation in the country could be protected from adverse external economic influences. 1.1 percent increase was provided even last year in the case of the present world economic recession. Especially, as a positive continuation of the economic diversification processes non-oil industry grew by 8.4 percent and at present, its share in the country`s gross domestic product reached 70 percent. Also last year, budget revenues on this sector increased 9.5 percent, last year and 3.6 percent increase manifested itself in the export of non-oil products ."

The minister noted that the implementation of all programs on social sphere is successfully continued, the next steps are being taken to strengthen the social protection of the population: "Just last year, amount of funds allocated from the state budget for social spending was more than 5 percent compared to 2014, that it confirms once again the policy of the state is socially oriented. In recent days, increasing social payments aimed at socially vulnerable groups, salaries and so on was provided with the relevant documents signed by the head of state".

Mr. Muslumov stated that the aim of the new economic policy of the head of state is accelerating development of the non-oil sector nowadays: "The cooperation ongoing successfully between Azerbaijani government and the Asian Development Bank for a long time covers the non-oil areas and contribute to the development of social infrastructure in the country. In addition, social projects implemented by ADB on related to the internally displaced persons, practical benefits are commendable. "Country Partnership Strategy" approved by Organization in 2014-2018, is of paramount importance in terms of supporting the diversification of the economy in the context of cooperation, development of private sector, as well as measures related to the low-income population, the implementation of an inclusive approach to the social security system. Providing information on reforms carried out in the fields of labour and social protection in Azerbaijan, the Minister stated that expanding cooperation with ADB in these areas is advisable. Head of the ADB delegation Giovanni Capannelli spoke about the projects implemented in cooperation with the government, their positive results. He stated that he is ready to support for reforms carried out in the field of labour and social protection in Azerbaijan.

The meeting also featured discussion of ensuring inclusive social development, cooperation in this field under the conditions of maintaining macroeconomic stability and other issues.