Turkey holds 10 suspected of sending fighters to Syria, arming them 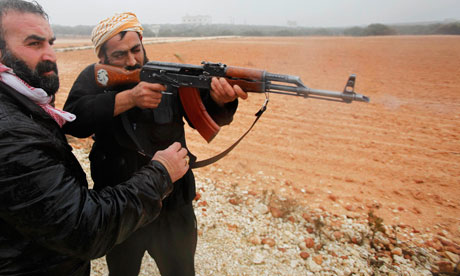 The suspects were arrested in Konya province
Turkey detained 10 people on Tuesday on suspicion of providing weapons and fighters in the name of al Qaeda to opposition fighters trying to topple the Syrian government, highlighting the dilemma Turkey faces as one of the opposition movement`s biggest backers Today`s Zaman reported.

Turkey, which is now hosting some nearly 200,000 Syrians who have fled the war, is one of President Bashar al-Assad`s most outspoken critics and has given the opposition fighters shelter and logistical support, although it denies arming them.
A camp dedicated to soldiers who have defected from the Syrian government army sits along Turkey`s southern border with Syria and opposition fighters are able to cross freely back and forth across the frontier.

Yet at the same time, it has no desire to let the radical groups who have joined the opposition cause, notably the al Qaeda-linked al-Nusra Front, operate on its territory or recruit Turkish citizens.

The suspects were arrested in Konya province, some 250 km (150 miles) south of the capital Ankara, after police were tipped off that a "radical Islamist group" was persuading young men to join the Syrian insurgents, Turkish media reported.

According to the report, the men were also suspected of supplying handguns and rifles to the opposition fighters, who have been fighting to overthrow Assad in a civil war that started as a peaceful street uprising two years ago.

Konya police declined to comment on the detentions.
Television footage showed handcuffed men with long beards being escorted to police headquarters after being detained during what it said were dawn raids at several addresses in Konya.

"This case is not about al Qaeda, we have been detained because we read the Koran, because we are Muslims, and because we help Syrians," one man told reporters as he was led away.
Western powers, who have also pledged aid for the opposition fighters but stopped short of providing weapons, have also expressed concern that al Qaeda-affiliated militants have been gaining ground in Syria. Reports are growing that their numbers are being swelled by foreigners, including Turks.

Last week, Turkish media reported that police had uncovered a plot linked to al Qaeda to bomb the US embassy in Ankara, a synagogue in İstanbul and other targets.

Unconfirmed reports said more than 10 people had been arrested and explosives seized in relation to the suspected plot during police raids in February in İstanbul and Tekirdağ, to the west.

Earlier in February, a suicide bomber killed one Turkish security guard and wounded several other people in an attack on the US mission in Ankara that was claimed by a leftist group.
While Turkish police often arrest suspected militants and describe them as having links to al Qaeda, details seldom emerge. Al Qaeda was behind bomb attacks in 2003 that killed some 60 people and wounded hundreds in İstanbul.