Thanksgiving: From gratitude to God in 1863 to today 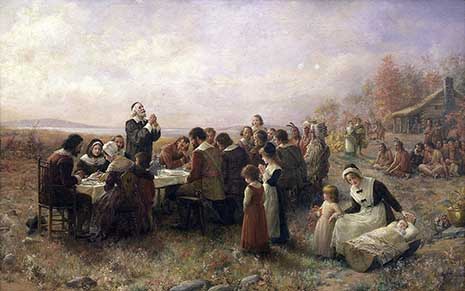 If giving thanks isn`t inherently religious, where does it come from?

The thing about people who study gratitude for a living is: They`re really nice. They`re also prolific thankers.

"Grateful for your calling attention to this important virtue without which we would not be fully human!!!!!" wrote one professor in the closing of an email exchange.

The social science on gratitude is pretty resolute: Feeling thankful is good for you. "There’s something called a grateful personality that some psychologists have studied," said Jo-Ann Tsang, a psychologist at Baylor University. "They find that if you’re greater in the grateful personality, you tend to have increased life satisfaction, happiness, optimism, hope, positive emotion, and ... less anxiety and depression."

Other studies suggest that diaries, daily reminders, and intentional reflection on what you`re thankful for can boost happiness, positive emotions, and a sense of meaning in life, Tsang said. Physical benefits may include fewer symptoms of illness and better sleep. These activities "can even help people with moderate body-image issues, and also people with moderate anxiety issues," she added.

Given all this, it makes sense that gratitude researchers would drop a few extra "thank you`s" into their everyday correspondence; benefitting from the side effects of gratitude is like a professional perk.

Most humans are not social-science robots, calculating every act with an eye to algorithmic improvement of personal well-being. Spend a long day at work, or clean your little cousin`s weirdly yellow vomit off your shirt for the umpteenth time, and gratefulness is not necessarily the foremost emotion you`ll feel.

But gratitude isn`t just an emotion: It`s also a value. In most cultures, but especially in America around Thanksgiving time, being grateful is seen as a virtue; the entire country stops working and gathers together, because being thankful is something we should do.

In the American context, thankfulness is a genuine puzzle of cultural inputs. It`s not political; #blessed is in neither the Constitution nor The Federalist Papers. But it is nationalistic, in some sense; Thanksgiving was created by Abraham Lincoln in 1863 in the midst of civil war, a bid to restore "the full enjoyment of peace, harmony, tranquillity and Union" in the United States.

Even so, when Lincoln announced the new holiday to be held annually on the last Thursday of November, he used the language of Christianity to explain the logic of this national ritual (emphasis added).

The year that is drawing towards its close, has been filled with the blessings of fruitful fields and healthful skies. To these bounties, which are so constantly enjoyed that we are prone to forget the source from which they come, others have been added, which are of so extraordinary a nature, that they cannot fail to penetrate and soften even the heart which is habitually insensible to the ever watchful providence of Almighty God ...

While offering up the ascriptions justly due to Him for such singular deliverances and blessings ... also, with humble penitence for our national perverseness and disobedience, commend to His tender care all those who have become widows, orphans, mourners or sufferers in the lamentable civil strife in which we are unavoidably engaged, and fervently implore the interposition of the Almighty Hand to heal the wounds of the nation.
America is, and always has been, a nation of Christianity: Faith is in the country`s founding, political philosophy, and history. Religion is undeniably part of the American public sphere.

But in 1863, America was a different kind of Christian nation than it is now. The country is far more religiously diverse and culturally secular than it was when Thanksgiving was founded. A strong majority of Americans consider themselves religious, but for many others, religious faith doesn`t play much of a role in their everyday lives. And although roughly 90 percent of people in the U.S. believe in "God or a universal spirit," faith doesn`t have much bearing on the way Thanksgiving is talked about in public life, from Butterball commercials to the Macy`s Parade. Gratitude is the animus of these secular rituals, but the object of the gratitude is unclear. If people aren`t thanking God, who are they thanking? You can thank your grandma for making delicious pie, but who do you thank for the general circumstances of your life?

This is why secular, Thanksgiving-flavored gratitude seems so fuzzy. Religions from Christianity to Hinduism to Wicca all emphasize the importance of thankfulness, especially as a form of prayer. This is because they rely on the premise of an other, some sort of non-human being that has some sort of control or influence in the world who you can thank for the world and the good things in it.