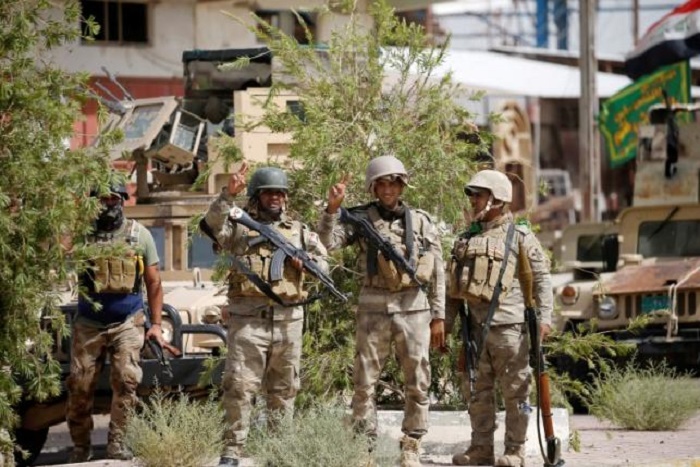 Iraqi forces on Friday entered the center of Falluja, the Iraqi city longest held by Islamic State, nearly four weeks after the start of a U.S.-backed offensive that cleared out the tens of thousands of residents still there.

Government troops, supported by multiple air strikes from a U.S.-led coalition, recaptured the municipal building, though the ultra-hardline militants still controlled a significant portion of Falluja, an hour`s drive west of Baghdad, and many streets and houses remain mined with explosives.

Federal police raised the Iraqi state flag above the government building and continued pursuing insurgents, according to a military statement. U.S. Defense Secretary Ash Carter said Iraqi forces had taken back a portion of the city, although he added: "There`s still some fighting to be done."

Prime Minister Haider al-Abadi declared victory shortly after nightfall, as government forces continued pushing into parts of the city held by the militants.

Security forces have "tightened their control inside the city and there are still some pockets that need to be cleansed in the coming hours," he said in a brief speech on state television.

Troops could be seen coming under sniper fire earlier in the day as they entered a large mosque about 100 meters (300 feet) from the municipal building. Clashes also involved gun fire, artillery and aerial bombardment, sending clouds of smoke towards the sky above the city center.

Sabah al-Numani, a CTS spokesman, said on state television that snipers were holed up inside the main hospital.

Iraq launched a major operation on May 23 to retake Falluja, a bastion of the Sunni Muslim insurgency against U.S. forces that toppled Saddam Hussein, a Sunni, in 2003, and Shi`ite-led governments that followed.

The participation of Iranian-backed Shi`ite militias in the battle alongside the Iraqi army raised fears of sectarian killings, and authorities are already investigating allegations that militiamen executed dozens of Sunni men fleeing the city.

Iraq`s top Shi`ite cleric, Grand Ayatollah Ali al-Sistani, urged pro-government fighters in a Friday sermon not to seek revenge against residents. There were no initial signs that Shi`ite militiamen had entered the city proper.

Falluja was seen as a launchpad for recent Islamic State (IS) bombings in Baghdad, making the offensive a crucial part of the government`s campaign to improve security in the capital.

U.S. allies would prefer to concentrate on Islamic State-held Mosul, Iraq`s second largest city located in the far north of the country.

Enemies of Islamic State have launched major offensives against the jihadists on other fronts, including a thrust by U.S.-backed forces against the city of Manbij in northern Syria.

The attacks amount to the most sustained pressure on the group since it proclaimed a caliphate in 2014.

Islamic State has begun allowing thousands of civilians trapped in central Falluja to escape and the sudden exodus has overwhelmed displacement camps already filled beyond capacity.

More than 6,000 families left on Thursday alone, according to Falluja Mayor Issa al-Issawi, who fled following the IS seizure of city in January 2014.

"We don`t know how to deal with this large number of civilians," he told Reuters on Friday.

The number of displaced people surpassed 68,000, according to the United Nations, which recently estimated Falluja`s population at 90,000, only about a third of the total in 2010.

Witnesses said Islamic State had announced via loudspeakers that residents could leave if they wanted. It was unclear why the group changed tack after clamping down on civilian movement only a few days ago.

The Norwegian Refugee Council (NRC), which has been providing aid to displaced people, said escapees reported a sudden retreat of IS fighters at key checkpoints inside Falluja that had allowed civilians to leave.

"Aid services in the camps were already overstretched and this development will push us all to the limit," said NRC country director Nasr Muflahi.

Islamic State, which by U.S. estimates has been ousted from almost half of the territory it seized when Iraqi forces partially collapsed in 2014, has used residents as human shields to slow the military`s advance and help avoid air strikes.

Addressing Falluja`s residents, Prime Minister Abadi said in his speech: "We want there to be security and peace in this city for you to go back to live there."