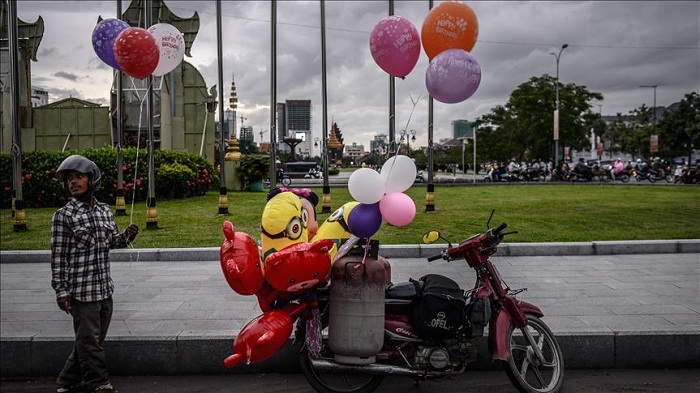 More than four years after roadside barbecue spits were outlawed in Cambodia due to fears they could encourage violence, municipal officials have taken aim at another unlikely menace: helium balloons.
The English-language Cambodia Daily said Wednesday that a district governor in the capital Phnom Penh had warned that the helium tanks used to inflate balloons would “cause explosions that will frighten people,” risking “a stampede and the gas explosion would burn and injure others”.

Helium is a non-combustible gas.

Wednesday`s incident was not the first time officials have accused something seemingly innocuous of having the potential to cause chaos.

In 2012, the daily quoted a member of the Buddhist patriarchy as saying that spit-roasting cows “is a show of support for violence in a country that believes in the Buddhist religion,” and could “instill the ideas of a massacre to a child and push them to commit violence in society.”

In the late afternoon, balloon sellers typically set up their operations along Sihanouk Boulevard, a main thoroughfare where the prime minister’s opulent mansion is situated, as well as near the Royal Palace and along the riverside.

On Wednesday evening, a few balloon-sellers remained dotted along the boulevard with their wares, both with and without helium tanks.

Balloons festooned with cartoon characters such as Despicable Me’s Minions fluttered in the breeze as a small group of armed police stood watch near the premier’s house.

City Hall spokesman Mean Chanyada could not be reached for comment.

The district governor`s targeting of balloon sellers came just hours before a grenade was lobbed into the middle of a street before 8 p.m. (0100GMT) Tuesday, injuring three people and damaging two cars.

On Monday, authorities barricaded a road leading to the headquarters of the opposition and deployed armed police to street corners.