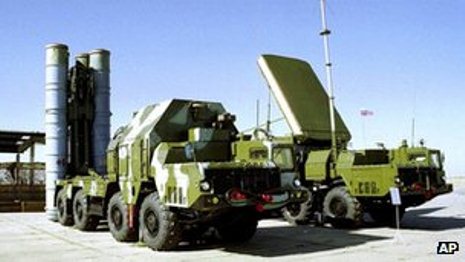 Talks in Russia between President Vladimir Putin and Israeli PM Benjamin Netanyahu in Russia are to focus on the conflict in Syria, official say.
Russia is concerned by Israeli air strikes on targets inside Syria, while Israel is unhappy at shipments of Russian weapons to Damascus.

Moscow has been at the centre of recent diplomatic efforts to end the conflict.

Meanwhile, a video has emerged that appears to show a Syrian rebel cutting out and eating the heart of a soldier.

"I swear to God we will eat your hearts and your lives, you soldiers of Bashar the dog," the man says as he bends over a body and cuts out the heart with a knife.

He then stands up and proceeds to place the organ in his mouth.

The authenticity of the footage, posted online on Sunday, cannot be authenticated, but Peter Bouckaert of Human Rights Watch identified the man as Abu Sakkar, a well-known rebel from the city of Homs and founder of the Farouq Brigade of the Free Syrian Army.

"The mutilation of the bodies of enemies is a war crime. But the even more serious issue is the very rapid descent into sectarian rhetoric and violence," Mr Bouckaert told Reuters news agency.

The UN says 70,000 people have been killed since the uprising against President Bashar al-Assad began in March 2011. The UK-based Syrian Observatory for Human Rights puts the death toll at more than 80,000.