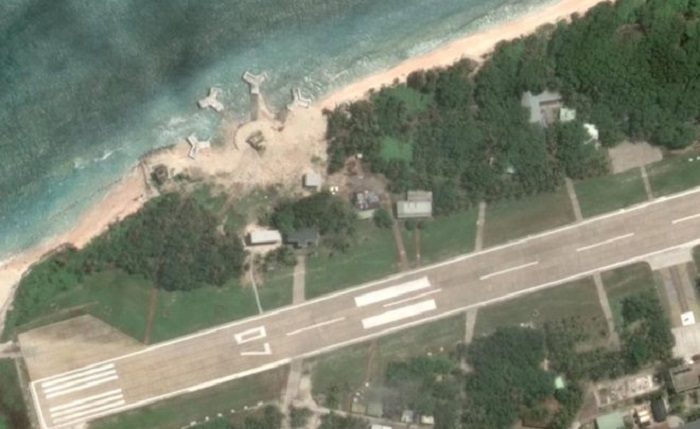 Taiwan has asked Google to blur satellite images of what appear to be new military installations on a disputed island in the South China Sea.
Taiping Island, also known as Itu Aba, is part of the Spratly Island chain, embroiled in increasingly tense South China Sea territorial disputes.

Although it is controlled by Taiwan, the island is also claimed by mainland China, Vietnam and the Philippines.
Four new structures have appeared since Google Earth`s last satellite images.

The images showed four three-pronged structures in a semi-circle next to an upgraded airstrip and near a sizeable new port.

What is the South China Sea dispute?

Rival countries have wrangled over territory in the South China Sea for centuries, but tension has steadily increased in recent years. Its islets and waters are claimed in part or in whole by Taiwan, China, Vietnam, the Philippines, Malaysia and Brunei.

China has backed its expansive claims with island-building and naval patrols, while the US, which has also sailed through the disputed waters, says it opposes restrictions on freedom of navigation and unlawful sovereignty claims by all sides.

The frictions have sparked concern that the area is becoming a flashpoint with possible global consequences.

Why is the South China Sea contentious?

Taiwan Defence Ministry spokesman Chen Chung-chi said on Wednesday that "under the pre-condition of protecting military secrets and security, we have requested Google blur images of important military facilities".

The country`s Coast Guard Administration also confirmed to the BBC that it was in talks with Google, which they said may not have been aware it was a military zone.

The Coast Guard said it believed other countries would have similar issues with images of such restricted zones.

Google has said that it is reviewing the request.

"We take security concerns very seriously, and are always willing to discuss them with public agencies and officials," Google spokesman Taj Meadows told the BBC.

It has not blurred imagery in response to similar requests in the past. Much of this imagery comes from third party providers, which means that it is likely to be available through a number of other commercial routes.

The increasing militarisation of the South China Sea, where China is rapidly building islands to buttress its territorial claims has stoked tension in the region.
An international tribunal recently ruled against China`s claims, backing a case brought by the Philippines.

The Permanent Court of Arbitration ruled Taiping was classified as a "rock" rather than an "island" and therefore not entitled to a 200 nautical mile exclusion zone. The verdict was rejected by both Beijing and Taipei.
Share this story About sharing