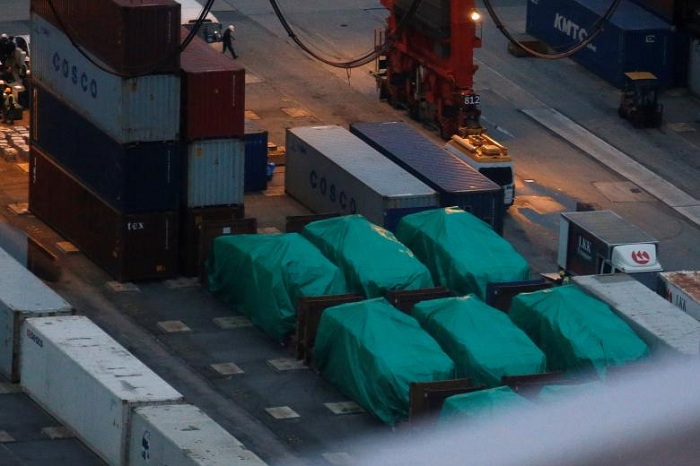 Beijing on Friday warned countries against maintaining military ties with Taiwan, after Singaporean armored troop carriers were seized en route from the island that Beijing regards as a breakaway province.
Chinese foreign ministry spokesman Geng Shuang said that Beijing was verifying reports that Hong Kong customs had seized nine Singapore troop carriers and other equipment in 12 containers being shipped from Taiwan after military exercises.

Singapore`s defense ministry said on Thursday it was trying to free the carriers "expeditiously", while Hong Kong customs said on Friday that its officers were still investigating the shipment.

"The entry and exit of foreign personnel and goods in the Hong Kong special administrative region should respect its relevant laws," Geng said.

"I wish to reiterate that the Chinese government consistently and resolutely opposes any form of official exchanges, including military exchanges and cooperation, between countries with which we have diplomatic relations and the Taiwan region."

The seizure comes amid mounting regional uncertainty and signs of rising tension between China and Singapore, which has deepened its security relationship with the United States over the last year and remains concerned over Beijing`s assertive territorial stance in the South China Sea.

Officials on both sides have unusually traded barbs in public in recent months, including an accusation by Singapore`s ambassador to China in September that a major state-run Chinese newspaper had fabricated a report about Singapore`s position on the South China Sea.

Chinese leaders have repeatedly told Singaporean counterparts not to get involved in the territorial dispute, in which China asserts sovereignty over waters and islands claimed by the Philippines, Vietnam, Malaysia and Brunei.

Singapore has no claims, but as the biggest port in Southeast Asia, its open economy depends on continued free navigation in the area.

Singaporean defense experts say the Singaporean military still maintains a small semi-permanent presence in Taiwan, with larger numbers of infantry troops being sent to the island for annual training drills.

It has gradually reduced that training, moving to other facilities in Australia and India, but is unlikely to pull out of Taiwan completely, experts said.

Singapore has also traditionally served as a venue for diplomacy between Beijing and Taipei.

Bernard Loo, a security expert at Singapore`s S. Rajaratnam School of International Studies, said that while some kind of administrative mistake may have sparked the detention, he suspected that Chinese officials would be keen to use the case to send another signal of concern to Singapore.

"In the current climate between Singapore and China, this one is a real opportunity for Beijing to pressure Singapore a bit more," he said.

Regional diplomats said that Chinese military officials could be expected to discreetly inspect the vehicles and other equipment.

While state-of-the-art, the Singaporean vehicles are not considered particularly sensitive military equipment.

While Hong Kong runs a separate government system from mainland China under the terms of its handover from Britain to China in 1997, including customs, Beijing has the right to get involved in issues related to foreign affairs and defense.

"APL was required to comply with all regulations including ... obtaining the necessary permits required to transit through ports," a ministry statement said.

APL staff are now working with Hong Kong officials to free the shipment, aided by Singaporean diplomats and military officials.

An APL spokesman confirmed the discussions.

"APL is committed to ensuring cargo security as well as full compliance with all regulatory and trade requirements in its conduct of business," the spokesman said. APL is a subsidiary of the French-based CMA CGM Group.