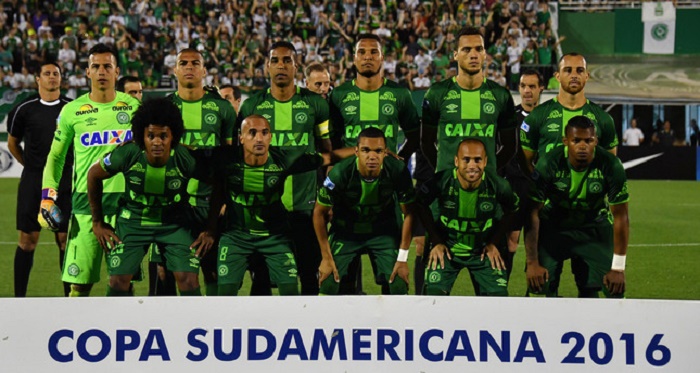 Brazil postponed all soccer matches for a week on Tuesday as tributes from clubs, players and fans poured in from around the world for Brazil`s Chapecoense team after several players died in a plane crash in Colombia.

Some of the biggest names in sport sent their condolences to the little team from Chapeco in southern Brazil. Chapecoense had been heading for the biggest game in its history - Wednesday`s first leg of the Copa Sudamericana final - when its plane went down in a mountainous rural area outside the city of Medellin.

Brazilian soccer legend Pele captured the mood of many when he said on Twitter: "Brazilian football is in mourning."

"Sad day for football," Barcelona and Argentina striker Lionel Messi said in a Twitter post. "Our thoughts and prayers are with the family and friends of Chapecoense players and others who died. RIP."

Some players and clubs changed their social media profile pictures to a black version of Chapecoense`s green badge and many included the hashtag #ForcaChape, or Strength to Chape, after the club`s nickname.

The Brazilian Football Confederation said in a statement it was declaring seven days of mourning and postponed all Brazilian football matches for that period.

The second leg of the Brazilian Cup final between Gremio and Atletico Mineiro was delayed from Wednesday until Dec. 7. The final round of matches in the Brazilian Serie A now will take place on Dec. 11, a week later than planned.

England captain Wayne Rooney said: "Sad news to wake up to today. Thoughts are with @ChapecoenseReal and their family and friends."

One of the first messages came from the team Chapecoense was to play Wednesday`s final, Atletico Nacional of Medellin.

"Nacional deeply laments and stands in solidarity with @ChapecoenseReal in the accident and we await information from authorities," the club tweeted soon after the crash, which killed 76 people, was reported.

The disaster struck a chord with clubs the world over with Arsenal saying: "Thinking of you, @ChapecoenseReal" and Chelsea declaring, "Our thoughts are with everyone at @ChapecoenseReal, their families and all those affected by the tragedy in Colombia."

FIFA President Gianni Infantino said on Twitter: "At this difficult time our thoughts are with the victims, their families and friends."

Many clubs, including Spanish giants Barcelona and Real Madrid, observed a minute`s silence before training on Tuesday.