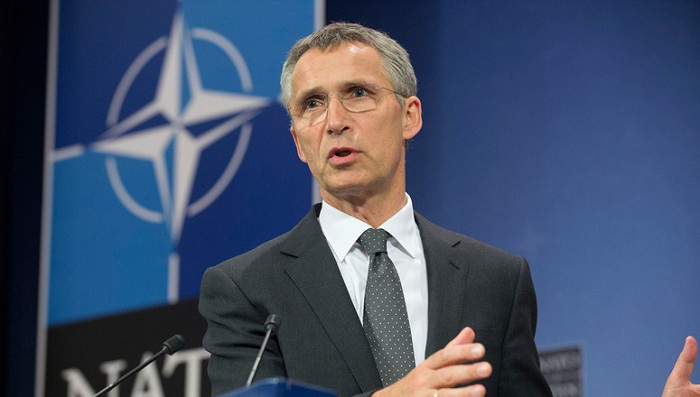 NATO Secretary General Jens Stoltenberg has urged Western allies to maintain diplomatic pressure and sanctions on Russia until it respects the peace agreement in Ukraine.
After talks with NATO and Ukraine foreign ministers, Stoltenberg told reporters Dec. 7 of a “massive increase in cease-fire violations” in the conflict-torn east of the former Soviet republic. He said hundreds of explosions are sometimes reported daily, including many caused by heavy weapons banned under the Minsk peace accords.

“The international community must keep pressuring Russia to respect its obligations, especially while the security situation in eastern Ukraine remains so serious,” Stoltenberg said. “It’s important that economic sanctions be maintained.”

More than 9,600 people have been killed since April 2014 in eastern Ukraine, where Russia-backed separatists are fighting Ukrainian government troops. Russia and Ukraine have blamed each other for the lack of progress in settling the conflict.

A meeting last week of foreign ministers from Russia, Ukraine, France and Germany intended to shore up the shaky peace process ended without result, raising fresh questions about whether the process will work.

“Diplomacy offers the only viable solution to the conflict in Ukraine, so it is unfortunate that last week’s meeting of the Normandy format was inconclusive,” Stoltenberg said.

Meanwhile, NATO and the European Union made a public show of unity Dec. 6 in the face of criticism from U.S. President-elect Donald Trump, hailing their deepening cooperation as Trump insists European allies start pulling their own military weight.

“Today, we really mark a milestone in our effort to build cooperation,” Stoltenberg told reporters Dec. 6.

Trump lambasted European nations during his presidential campaign for not investing enough in defense and said he wants NATO to do more to combat terrorism. Fewer than half a dozen of the 22 allies in the EU spend 2 percent of their gross domestic product annually on defense, a threshold target set by NATO.

U.S. Secretary of State John Kerry, on the other hand, said the U.S. commitment to NATO would remain “unwavering” despite the change of administration following Trump’s election.

“The change of the administration will not change the unwavering commitment of the U.S. to... our NATO obligations,” Kerry said after talks with his NATO counterparts in Brussels.

“The US commitment to NATO and Article Five transcends politics,” added Kerry, referring to the military alliance’s collective defense policy in which an attack on one member is an attack on all.